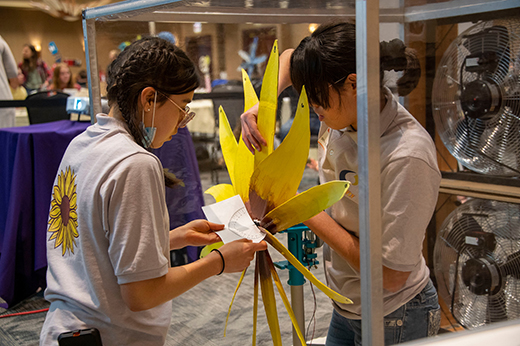 Students on the SunFloWin team adjust the pitch on their turbine blades during the wind tunnel performance event at the recent Kansas KidWind Challenge. | Download this photo.

MANHATTAN — Student teams from schools in Beloit, Centralia, Dighton, Oakley, Seneca and Sterling will represent Kansas in May at the National KidWind Challenge in San Antonio.

The teams advanced to the national competition after earning top-three finishes in their divisions at the Kansas KidWind Challenge on April 2 in Topeka. The event is sponsored by the Kansas Energy Program in Kansas State University's Engineering Extension Service, in partnership with the Kansas Corporation Commission. This year's competition featured approximately 80 students from 22 schools throughout the state, including eight teams of fourth through eighth graders and 13 teams of ninth through 12th graders.

Each team had to research, design, and build its own wind turbine to test in a wind tunnel that is 4 feet by 4 feet. Each team was awarded points in four areas: turbine performance, a knowledge quiz, an instant challenge and a judge's panel, where the team members have to present their design-and-build process.

The top three finishers in the fourth through eighth grade division:

The top-three finishers in the ninth through 12 grade division:

"The KidWind Challenge is a great exercise in active learning," said David Carter, director of the Kansas Energy Program. "We pay close attention to the teams' improvements from the regional to state challenge; some teams improved turbine performance by 248% and turbine efficiency by 955%."