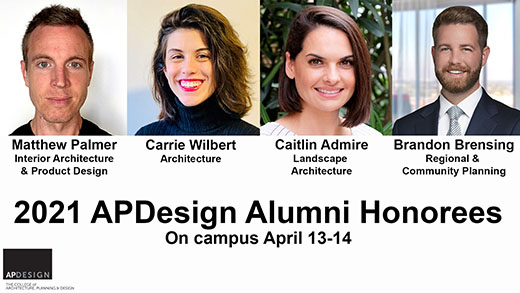 The College of Architecture, Planning & Design is honoring four alumni from the class of 2011 for career successes.

MANHATTAN — The Kansas State University College of Architecture, Planning & Design, or APDesign, is recognizing four graduates for their successes 10 years after their graduation from the university and the college's programs.

The department or program from which the alumni received their degree selected the honorees. The honorees are on campus April 13-14 to meet with students and faculty, participate in class and studio visits, and be honored at a luncheon. An exhibit of their professional work is on display in Regnier Hall's atrium through April 22. The exhibit is free and open to the public from 8 a.m. to 5 p.m. weekdays.

"Our honoree program recognizes the immediate and enduring impact of our recent graduates and brings together classmates at the 10-year mark," said Tim de Noble, professor and dean of the college and a fellow of the American Institute of Architects. "It is fitting that all of the disciplinary representatives reconvene to share their experiences and views on the evolution of the planning & design professions."

Brensing, who received a Master of Regional and Community Planning, is vice president of real estate development for Ryan Companies' Midwest region. Ryan Companies is a national leader in commercial real estate services with 17 offices nationwide and a $5.5 billion annual revenue. Brensing is instrumental in leading new business efforts and facilitating teams through all aspects of the development process. He focuses on site selection and acquisition, due diligence, entitlements, financial incentives, design and construction coordination, lease and sale negotiations, and project financing. His diverse background in development spans from project conception to disposition with large, complex vertical and horizontal mixed-use development.

Wilbert, who earned a Master of Architecture,is an architect and urban designer educated and trained in Kansas and France. With AtelierTek since 2021, she also worked for more than eight years in Paris on projects specializing in urban regeneration and resilience. Wilbert started her career working on large-scale international projects, including designing a cover for the Pan-American Highway with an urban park running through the center of Santiago, Chile, and a master plan for Wuhan, China, focused on connecting three major universities and improving the urban fabric to benefit local residents and better retain post-graduate talent in the city. She then worked on local Parisian projects such as a brewery design and an urban reactivation development. Wilbert earned a post-graduate degree in urban design from ENSA Paris Belleville. She is a licensed architect in France and has taught architecture and urban design courses at Académie de la Grande Chaumière & Charpentier and Kent University in Paris.

Palmer, who earned a Master of Interior Architecture & Product Design, is a footwear designer II for Nike, where he was worked since 2012. He focuses on athletic performance and technical innovation. Palmer has designed Nike shoe models for trail terrain, collaborated with designers to create footwear prototypes and accelerate innovation development and testing. Some of his skills include sketching, prototyping, pattern engineering and stitching.

Admire, who earned a Master of Landscape Architecture, spent nearly a decade practicing landscape architecture and urban design in the private sector, specializing in strategic land planning for mixed-use communities. She joined the city of Austin's Office of Sustainability in 2019 and worked on a variety of initiatives around climate mitigation, adaptation and resilience related to green building, green infrastructure and biophilic cities. She currently serves in the city's Urban Design Division where she manages the Great Streets Program and continues her passion for finding opportunities to infuse moments of nature into the urban fabric and everyday lives of Austin residents. She is active in the local district council of the Urban Lands Institute, as well as the Biophilic Cities Network and the Dean's Advisory Council for the K-State College of Architecture, Planning & Design.