Watch a video that explains the process of creating graphene.

MANHATTAN — It's a true research success story: Explosive graphene and hydrogen research from Kansas State University has turned into a successful international company, HydroGraph Clean Power Inc. The company recently went public on the Canadian Securities Exchange and is preparing for decades of growth as an important research and development hub.

HydroGraph and the K-State research involve a simple new way to create graphene: Put acetylene and oxygen in a small chamber and create a controlled detonation that produces large amounts of graphene from a single spark.

The K-State detonation method of creating graphene checks all the right boxes. The process is safer, cleaner, environmentally friendly, cheaper, consistent and faster than other methods. An added bonus is that it is also scalable and can produce high-quality graphene in mass quantities.

Sorensen's work caught the eye of Harold Davidson and Barry Hemsworth, entrepreneurs from Vancouver, British Columbia. Davidson reached out in 2017 to start a collaboration with Sorensen to build up and automate the graphene-making process to an industrial scale. Davidson and Hemsworth created a start-up company called Carbon-2D Graphene Inc. and worked hard to procure venture capital for Carbon-2D to fund Sorensen's research.

The investment paid off. The research not only led to a pilot-scale graphene production device, but another discovery: an environmentally benign, inexpensive method to make hydrogen. This is a significant advancement because hydrogen will be an important energy source in the near future, Sorensen said.

"We believe in partnerships and the partnership we have with K-State has been very productive," Davidson said. "The world of nanomaterials is going to open up to us and the process we have. We're using digital methods with our precisely controlled detonation technology, in order to create what we feel are going to be the nanomaterials required for the fourth industrial revolution."

Sorensen soon engaged Stefan Bossmann, university distinguished professor emeritus of chemistry, to assist in the chemical side of the collaboration. Bossmann applied a mild oxidation method to the graphene to make a high-quality graphene oxide, which maintains the integrity of the graphene and creates a new material with numerous possibilities.

"Our process is completely novel and our surface modification methods are ultraprecise," Bossmann said. "We use the explosion graphene and we modify only the outer layer, which means we maintain all other layers and their properties. That's enough to connect this outer layer to virtually any other matrix through well-established organic and inorganic chemistry."

Some of the recent patents from the collaborative research team include:

Other collaborators on the work include the University of Kansas Medical Center and Missouri University of Science and Technology. The funding and research will train nine graduate students.

"This research and commercialization partnership with HydroGraph is an excellent example of how K-State is actively working with companies to bring new businesses and jobs into the state of Kansas," said David Rosowsky, K-State vice president for research.

The multi-institutional research team continues to further expand on the detonation method to create graphene and hydrogen-rich syngas. They also are developing devices for more efficiently producing the unique graphene and graphene oxide. It's a collaboration with big plans for future growth and development.

"All of this started as curiosity-based research," Sorensen said. "Land-grant universities were founded on the idea that research and creative ideas formulated at the state university would yield useful technologies. That is exactly what happened here. Moreover, this type of intellectual property collaboration could be the future for K-State."

Read more about the method for making graphene and watch a video of the process.

The HydroGraph research partnership is one example of how Kansas State University is helping to improve the economic prosperity of Kansas. K-State has launched the Economic Prosperity Plan to help people and businesses in Kansas in four key areas: food and agriculture systems innovation; digital agriculture and advanced analytics; biosecurity and biodefense; and extension and outreach. Learn more at k-state.edu/economic-prosperity. 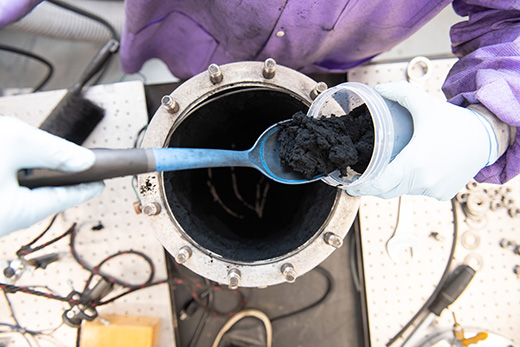 A Kansas State University researcher scoops out large quantities of graphene from a small detonation chamber. A K-State-patented method of creating graphene involves putting acetylene and oxygen in a small chamber and creating a controlled detonation. | Download this photo. 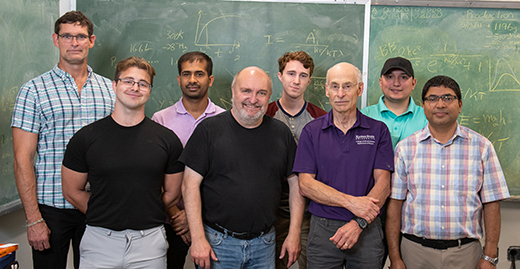 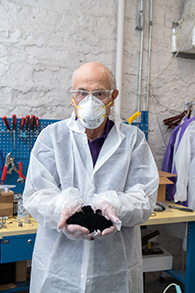 Chris Sorensen, Cortelyou-Rust university distinguished professor of physics, holds a sample of graphene that is made through a patented detonation method.