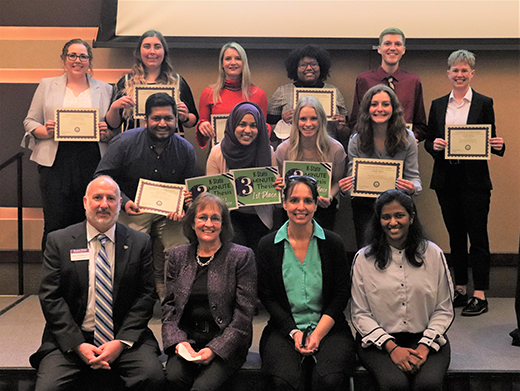 As the first-place winner, Iftikhar received a $500 scholarship and will represent Kansas State University in the 2022 Midwestern Association of Graduate Schools' Three Minute Thesis Competition, to be in Milwaukee on April 8. Iftikhar's advisor is Sajid Alavi, professor of grain science and industry.

K-State's 3MT began with a first round of competition on Feb. 23, which featured 41 graduate students. Participants were challenged with explaining their research in three minutes or less, using a single, static slide. Iftikhar and nine other students were selected for the final competition on March 1. Judges for the final competition were Mary Ice, K-State alumna, donor and advocate; David Rosowsky, K-State vice president for research; Jeanette Thurston, director of K-State's Food Science Institute; and Priyasha Fernando, master's student in civil engineering and People's Choice Award winner of K-State's 2021 3MT competition. Richard Linton, new K-State president, also was in attendance and joined Claudia Petrescu, K-State vice provost of graduate studies and dean of the Graduate School, in presenting certificates to presenters.

"Participation in 3MT was a refreshing and uplifting experience from the preparation to the presentation," Iftikhar said. "It encouraged me to consolidate and evaluate my research objectives with their significance and impact on humanity. Initially, it was incredibly challenging preparing for 3MT and unpacking complex research details into a simplified version to understand and connect the general public to my research."

She also said that presenting in the competition will always be a monumental memory for her.

"Winning first place and receiving recognition from the president of Kansas State University and the dean of our Graduate School was tremendous," Iftikhar said. "I am humbled and excited to represent K-State at the MAGS 3MT competition in April."

Iftikhar was also selected by the audience as the People's Choice winner and received a $125 scholarship.

"Honestly, I was not expecting at all to win this award," she said. "I was surprised hearing my name called! It was so rewarding that the audience genuinely connected with my work. Winning this award reinforced the fact that the audience enjoyed listening about my research as much as I was thrilled speaking about it."

Iftikhar strongly encourages all graduate students to participate in 3MT to strengthen their communication and presentation skills. She says it will help students connect to the bigger picture of their work and how it impacts our world.

"Competing in 3MT was wonderful and I am honored to have had the opportunity to represent my department," Schulze said. "It was a unique challenge to enthusiastically and succinctly convey the significance of complex research to a broad audience. I loved getting questions from the other participants and knowing that something I said resonated with them. Sharing a passion for research brought us together and overall, it was a very valuable experience."

Along with Iftikhar and Schulze, the competition featured the following finalists:

From out of country: Ketan Shende, doctoral student in biological and agricultural engineering, Mumbai, India. 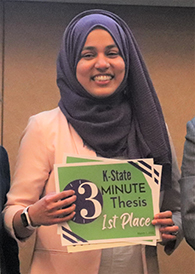 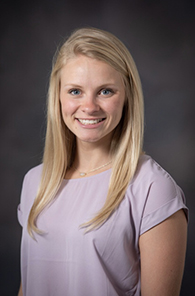 Kiana Schulze, a doctoral student in kinesiology, was selected for a second-place award for her Three Minute Thesis presentation.