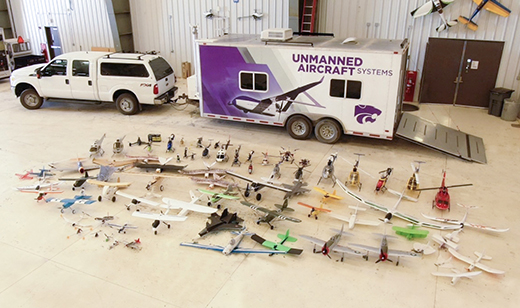 K-State Salina has received a donation of more than 65 aircraft, materials and tools to be used by students in the unmanned aircraft systems program. The donation came from a Dodge City family. | Download this photo.

SALINA— A gift from a Kansas family gives unmanned aircraft systems students at the Kansas State University Salina Aerospace and Technology Campus even more tools and equipment to help their education.

Sandra Herder, Dodge City, donated more than 65 aircraft, materials and tools to be used by students in the unmanned aircraft systems program, enhancing the scope of the equipment the campus offers.

The collection was from Herder's late husband, Paul. She said that some of the collection donated to K-State was built and flown by her husband since his childhood. Herder wanted to honor him and have his collection of remote-control aircraft be donated to a place where it could be a benefit.

Paul Herder's connection to aviation runs deep as he retired from the U.S. Air Force and worked with the Titan program in Wichita, which sparked his enthusiasm to collect diverse aircraft for years. Because he wore glasses, Herder said her husband was not eligible to fly some of his favorite aircraft while in the Air Force.

CEO and Dean Alysia Starkey said that the gift is an example of the campus's dedication to its Global Aeronautics Initiative, an effort to establish K-State Salina as a national leader for advanced aviation and aeronautical training.

"The campus is honored to accept a gift like this to help provide students an in-depth experience that prepares them to be leaders in the unmanned aircraft industry," Starkey said. "This helps support our global aeronautics mission by enhancing the student experience and ensuring that our students learn with the best technology available."

The Herder family's donation includes many items that students can use now to learn how some aircraft was constructed over 50 years ago.

"This donation consists of fixed-wing, multi-rotor and remote-control helicopters, along with numerous other pieces, will allow students to practice flight skills and build their own aircraft," said Kurt Carraway, UAS department head. "The gift even includes a vintage aircraft from the 1950s era, an electric ducted jet."

Carraway said the Herder family's donation will be a great benefit to the Applied Aviation Research Center, the UAS Flight Operations degree program and the student-run UAS Club on the K-State Salina campus. The club is for students interested in the design, construction, operation and integration of unmanned or autonomous systems. The club also competes in competitions across the region.