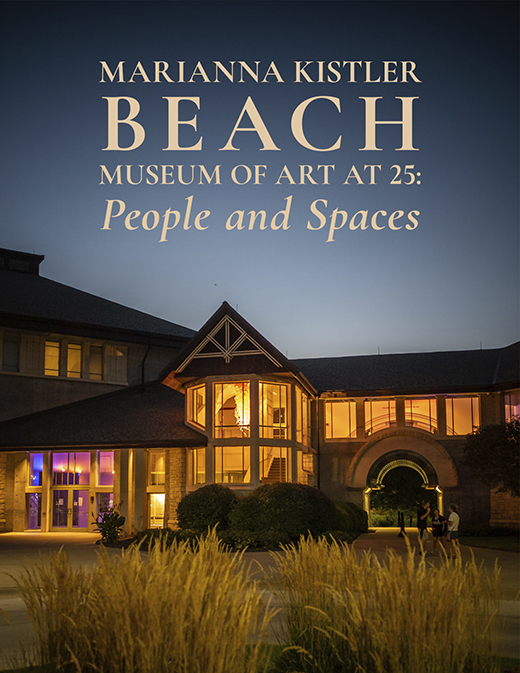 "Marianna Kistler Beach Museum of Art at 25: People and Spaces," an e-book celebrating the 25th anniversary of the Kansas State University art museum, can be downloaded for free at K-State's New Prairie Press. | Download this photo.

The book starts with an introduction by Linda Duke, museum director, and includes articles written by Friends' board members about the people for whom spaces in the museum are named.

"This diverse group of people and their contributions have made the museum what it has become during its first 25 years: a vibrant place for the collecting, studying, caring for and presenting the visual art of Kansas and the region," Duke said.

Included in the e-book are the contributions of Ruth Ann Wefald, the former K-State first lady who took the lead in obtaining supporters and funds to establish a home for the university's impressive art collection. When her husband, Jon Wefald, became president of K-State in 1986, the university was the only institution in the Big 8 Conference without an art museum. Her successful efforts led to construction of the on-campus museum, which officially opened in October 1996. An addition to the building was completed in 2007.

Photos are included of those who are honored in the e-book and of the spaces in the museum, including its galleries, educational wing, theater, offices and work and storage locations.

"The value of an art museum to a university campus, its surrounding community and beyond is demonstrated by the dedication of the individuals who advocated for the museum and brought it to reality 25 years ago. It clearly 'took a village' as well as strong leadership as the book documents," Goetsch wrote in a letter to Joe Mocnik, the new dean of K-State Libraries, in recommending the e-book be published by New Prairie Press.

"Marianna Kistler Beach at 25: People and Spaces" is free to download at newprairiepress.org/ebooks/43/.

"Marianna Kistler Beach Museum of Art at 25: People and Spaces"