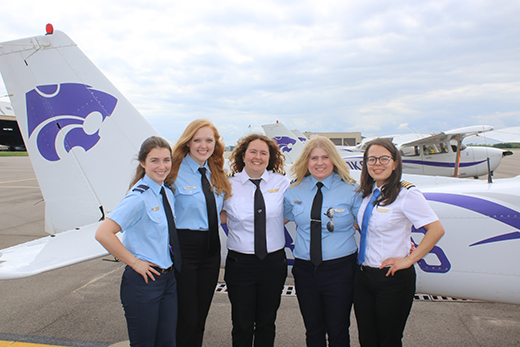 MANHATTAN — Many pilot students have fellow aviators to look up to and seek advice and support from, but for women in the aviation industry, this kind of camaraderie can be harder to find. Kansas State University Polytechnic Campus is changing that.

K-State Polytechnic's interim chief pilot Brandy Shaw and assistant chief pilot Karen Morrison are both accomplished female pilots and are in rare company. According to the Women in Aviation International, only 7.9% of pilots are female.

It is because of this leadership, in part, that K-State Polytechnic has seen a rise in women joining its professional pilot program.

From the start of the 2019 academic year, the professional pilot program has seen the number of female students nearly double. Twelve percent of all professional pilot students on the campus, located in Salina, are female. The number of women passing check rides — where students prove they understand and can perform specific maneuvers and pass a challenging written exam — has set a record for the campus and shows great promise for increasing the impact of women in the aviation industry as a whole.

"In spring semester completions alone, from February to June, we saw eight women complete successful check rides," Shaw said. "It's an incredible impact on our campus and I'm excited to see the future of the aviation industry."

The uptick in the number of female pilot students, who come from around the world, at K-State Polytechnic can be attributed to a more diversified recruitment strategy and positive, supportive mentorship from other female pilots, according to Shaw and Morrison.

Along with her role as assistant chief pilot, Morrison is also the advisor for the K-State Polytechnic chapter of Women in Aviation, an organization dedicated to the encouragement and advancement of women in all aviation career fields. She is excited to see both men and women passionate about the cause and becoming active chapter members.

"It's been an exciting adventure advising Women in Aviation," Morrison said. "My favorite part is when we show younger kids all the different sides to the aviation industry and hopefully inspire them to dream big."

Having women in leadership roles at K-State Polytechnic also is beneficial for students when looking at their future careers. Heather Thummel, sophomore in professional pilot from Topeka, said it paints a picture of the future.

"It's inspirational to see women in leadership roles and it shows me that I can do that one day, too," Thummel said.

Thummel wants to be part of the new Wildcat Mentor program, created by fellow professional pilot student Trey Varner, to let future female pilots know they are not alone and can pave their own way.

"Being involved in the Wildcat Mentor program can show younger students that, as upperclassmen, we've been where you are and you can do this too," Thummel said. "There's a camaraderie that is shared among the female pilots to let each other know you support them."

Morrison said a common desire of her students is to serve as mentors for incoming students.

"All of our successful pilot students are driven and aspirational," Morrison said. "They have a desire to show younger kids interested in aviation that your dream is possible — we're doing it, so can you, and we're here to support you." 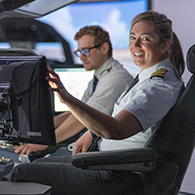