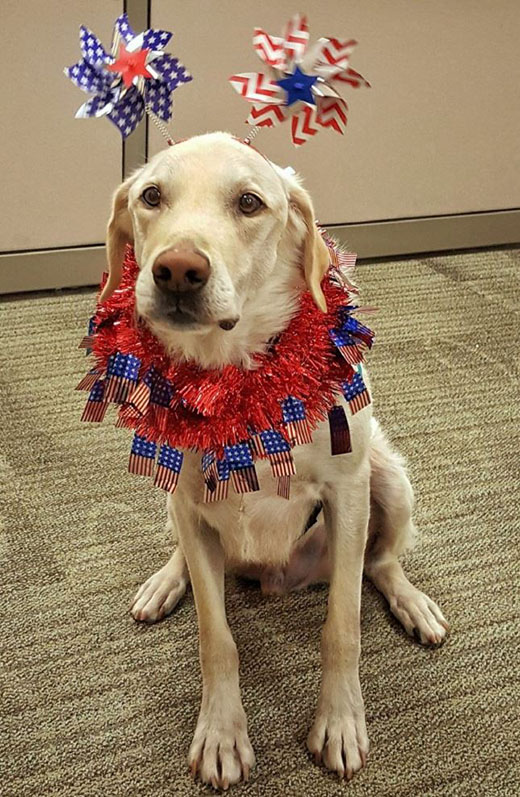 To make it a fun and happy holiday for all, a Kansas State University veterinarian says keep pet safety in mind. | Download this photo.

MANHATTAN — The Fourth of July may be a fun and noisy celebration for many people, but a Kansas State University veterinarian says that's not the case for some pets.

"This holiday is often a time filled with fear and anxiety for some pets — and it can also be a dangerous time for them as well," said Susan Nelson, clinical professor at the K-State Veterinary Health Center, a part of the College of Veterinary Medicine. "It is best to speak to your veterinarian now about medication options if needed, especially since the majority of fireworks will be set off over the weekend this year when your veterinarian’s office will likely be closed."

Nelson offers some tips to help keep pets safe this holiday. The first: Keep your pet indoors for the most part, and under leash control when you do need to take them outside.

"The sound of fireworks can make some pets run off in an attempt to get away from the noise," Nelson said. "In fact, this is the time of year with the highest incidence of runaway pets, so be sure to keep them secure."

Besides getting lost, Nelson said there is also the risk of pets getting hit by a car because their fear of fireworks will make them less observant of oncoming traffic. She recommends making sure your pet has some type of ID, such as a tag and/or microchip, in case it should get lost. Ideally, it should have both.

Nelson said keeping your pet inside also keeps it safe from those people who may try to harm an animal with fireworks.

"Many dogs will appreciate being in the safe confines of their crate and will do fine if allowed to stay there," Nelson said. "A secure room may also work as well. Be sure to close the blinds or use heavy curtains to block out the flashes of light."

Nelson also suggests the following to help calm a pet who gets rattled by loud noises:

• Play soothing music or turn on the TV or white noise machine in an attempt to block out the loud crackles and booms.

• Trying an anxiety wrap specially made for pets may help calm those with mild anxiety.

• Using over-the-counter medications made for anxious pets may benefit those with mild to moderate noise anxiety.

• Consider temporarily relocating your pet to a quieter friend/relative's house or kennel during this time.

• Talk to your veterinarian about prescription anti-anxiety medications if your pet has a severe noise phobia. Several different medications are available to help treat anxiety due to loud noises. Have the medication ready to give on the first day that fireworks are allowed to begin in your community.

Just as with young children, Nelson said it is important to keep dangerous items out of your pet's reach and not apply products on pets that aren't labeled for safe use on them.

Even if your dog is not bothered by fireworks, Nelson said it is still subject to being burned or injured by fireworks if it gets too close or attempts to retrieve one that has been ignited. Many fireworks also contain toxic chemicals if ingested.

Another product to avoid using on pets can be some insect repellants, Nelson said.

"Pets often experience vomiting and/or diarrhea when given foods they are not used to eating," Nelson said. "And some foods, such as chocolate, macadamia nuts, onions, grapes or raisins, coffee, salt and yeast-based bread dough are all potentially toxic for your pet."

When ingested, fatty foods can lead to life-threatening pancreatitis, while corncobs, bones and wooden barbeque skewers can cause blockage of the intestinal tract if swallowed. Nelson also said to keep any foods or candies sweetened with artificial sweeteners, such as xylitol, out of reach as they can be toxic to pets.

Another no-no for pets is alcoholic beverages. "Keep the beer and wine out of their reach," Nelson said.