Receiving the $1,000 scholarships and plaques are Ronaldo "Ron" Lopez, senior in mechanical engineering, Dodge City, and Olivia Pruss, May 2021 bachelor's graduate in biology and Spanish, Olathe.

The Muir Alpha Tau Omega Blue Key scholarships were first presented in 1999 to honor two brothers and K-State alumni, William "Bill" Muir and John "Tom" Muir, who were members of the Blue Key classes of 1939 and 1940, respectively. Blue Key recognizes college students at senior institutions of higher education for balanced and all-around excellence in scholarship, leadership and service. Scholarship winners are selected by their fellow Blue Key members.

His fellow Blue Key members describe Lopez as the hardest-working person they have met, original, limitless, determined, accomplished, loyal, sincere and witty. Serving as Blue Key's co-director of leadership programming, Lopez also was active in several other organizations. He was president of the K-State chapter of the Society of Hispanic Professional Engineers, director of multicultural affairs for the K-State Student Governing Association and a member of the Carl R. Ice College of Engineering Ambassadors. He was a chemistry tutor with K-State's Multicultural Academic Program Success, or MAPS. He also served internships with Chevron Phillips and Cargill. Lopez is a 2017 graduate of Dodge City High School and plans to graduate from K-State in December.

Blue Key members describe Pruss, who served as president of the honorary this year, as a true, devoted and natural-born leader, as well as driven, well-rounded, thoughtful, direct, helpful, authentic and more. Along with serving in Blue Key, Pruss was president of her sorority, Alpha Delta Pi, served on the Student Alumni Board and Student Foundation, and was a member of Quest, the freshman honorary. She was elected a College of Arts and Sciences senator for the K-State Student Governing Association and was selected as a student fellow at the K-State Center for Risk Management Education and Research. Currently a patient care assistant with the University of Kansas Health System, Pruss also served as a philanthropy intern at Children's Mercy Hospital in Kansas City. A 2017 graduate of Olathe Northwest High School, Pruss graduated summa cum laude from K-State and was on the university's semester honors list for four years. 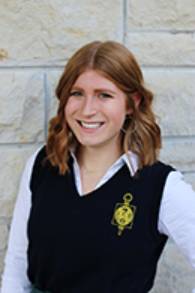