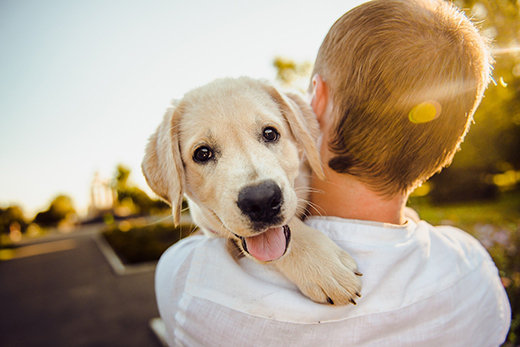 The American Veterinary Medical Association estimates that more than 17,800 dog bites occur every year in the U.S., with most victims children under the age of 2. April 11-17 is Dog Bite Prevention Week.

MANHATTAN — As the weather warms up, it's common to see dogs and their owners outside getting some fresh air and exercise. But with this increased exposure of dogs to other people and other dogs, comes an increase in the cases of dog bites, said a Kansas State University veterinarian.

The second week in April is National Dog Bite Prevention Week and a good reminder for everyone to practice safety around dogs, said Susan Nelson, clinical professor with the K-State Pet Health and Nutrition Center.

According to the American Veterinary Medical Association, an estimated 77 million dogs live in the U.S. and 38% of U.S. homes have at least one dog.

"The AVMA also estimates that more than 17,800 dog bites occur every year in the United States, with many of the victims children under 2 years of age," Nelson said. "According to the Insurance Information Institute, dog bites resulted in homeowner insurance payouts of $796.8 million in 2019. This was a 2.9% increase over the previous year. The national average for insurance claims related to a dog bite is $44,760."

Dogs can bite for many reasons, but Nelson said it is usually because they are reacting to some type of stimulus.

Nelson has tips for both pets and their owners to stay safe and avoid biting experiences.

"If you have a new puppy, it is very important to socialize it properly as well-socialized dogs are less likely to bite due to fear of strange people or being stressed by being in an unfamiliar environment," Nelson said. "This needs to happen very early during the first few months of life as this is a puppy's critical formative time. Ask your veterinarian for tips and good resources on how to do this."

Dogs also should be kept on a leash when in public so they can be controlled, Nelson said.

Nelson recommends using positive reinforcement during training, avoiding rough play between humans and dogs, giving dogs a safe space to enjoy meals where they won't feel threatened by other animals or humans, and giving dogs ample rest time to be away from both humans and other pets.

"To avoid bites, humans are responsible for keeping themselves and their pets safe in difficult situations," Nelson said. "Assume that all dogs are capable of biting — because they are. Dogs need a safe place where they can go to be alone and not be bothered by people or other pets. This can be in the form of a crate, bed or small room."

Nelson cautions that children and pets should never be left unattended and children should be taught to never approach an unfamiliar or sick dog, take a treat, toy or food from a dog, or to never hug, kiss or crowd a dog in a manner that could bring the animal stress. She emphasizes the importance of making sure all family members are educated on animal safety. This includes respecting the animal's need for privacy and to not bother it when it is eating or sleeping.

One should always ask an owner if they one can pet their dog, Nelson said, and respect their wishes if they say no.

"Don’t reach through or over a fence to pet a dog, even if it belongs to your neighbor," Nelson said. "Don’t play with puppies when their mother is around unless the owner is around to supervise. And don’t try to pet a dog that is growling or barking at you."

Finally, Nelson said it's important to keep dogs current on rabies vaccines. Encourage your children to always tell an adult if they were bitten and try to remember what the dog looked like.

"Dog bite prevention needs to be practiced year-round by everyone for the safety of people, especially our children, and for the benefit of our dogs," she said.

The second week in April is National Dog Bite Prevention Week and a good reminder for everyone to practice safety around dogs, according to Kansas State University veterinarian Susan Nelson.