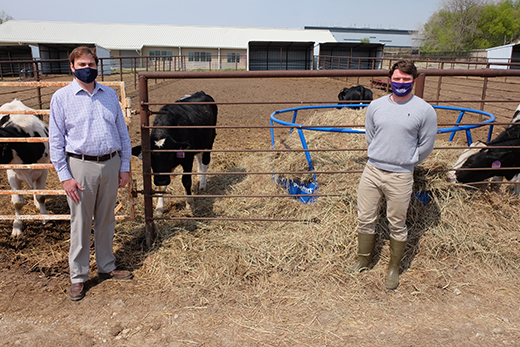 Hans Coetzee, professor and head of the anatomy and physiology department, left, and Andrew Curtis, doctoral student in physiology at Kansas State University, works with a cohort of calves for testing an implantable vaccine platform that may provide long-lasting protection against bovine anaplasmosis. | Download this photo.

The article, "Assessment of within-herd seroprevalence of Anaplasma marginale antibodies and association with decreased milk production in an Iowa dairy herd," co-authored by Andrew Curtis, a doctoral student in physiology, and Hans Coetzee, professor and head of the anatomy and physiology department, appears in the April issue of Applied Animal Science.

The researchers specifically found that 38% of the animals in the herd tested positive for bovine anaplasmosis, which is linked to significant production losses in cattle in the United States.

"Anaplasmosis has been a large part of my doctoral research," Curtis said. "I was fortunate to be able to revisit a dataset collected in Iowa from 2008-2011 while working on my dissertation. Although the original survey was completed a few years ago, the impact of anaplasmosis on dairy cattle and milk production has remained poorly defined in the literature. We recognized the opportunity to describe the relationship that appears to exist between anti-Anaplasma marginale antibodies and dairy production."

Cows that tested positive for the Anaplasma marginale antibodies produced significantly less milk than cows that tested negative. The authors concluded that by managing risks connected with new additions to a herd and by eliminating circumstances that may support disease transmission, production and herd health at the facility could have been safeguarded.

"This is an important finding, as it demonstrates the need for further study of the effects of Anaplasma marginale in dairy settings," Coetzee said. "The survey results also indicate that freedom from bovine anaplasmosis cannot be assumed for an entire geographic region."

Caused by the hemobacterium Anaplasma marginale, the clinical signs of the disease, which can be fatal, may include anemia, icterus, fever, weight loss, abortion, lethargy and lack of appetite. Anaplasmosis can be spread through ticks, horseflies and blood-contaminated objects, as well as through the placenta from cow to calf during pregnancy.

Curtis is currently working with a set of calves to test for an implantable vaccine platform that has previously been used against bovine anaplasmosis.

The authors were supported by Agriculture and Food Research Initiative Competitive Grants from the U.S. Department of Agriculture's National Institute of Food and Agriculture.