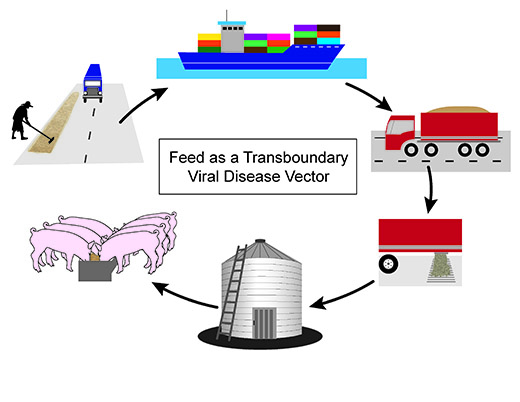 This illustration shows how feed ingredients may serve as transboundary vectors of swine viral diseases. Risky agricultural practices, such as drying grains on roadways represented in upper left corner, may contaminate feed ingredients in countries with circulating foreign animal diseases. The virus can potentially be transported across oceans and highways where the virus could survive and present a potential threat to livestock. Illustration courtesy of the journal Animals. | Download this photo.

MANHATTAN — Eight years of extensive research, including work at Kansas State University, has led to a disquieting scenario for swine producers: Feed and feed ingredients could potentially serve as means for the introduction and transmission of foreign animal diseases of swine.

Megan Niederwerder, assistant professor of diagnostic medicine and pathobiology in the College of Veterinary Medicine, recently published an overview on the significance of the collective feed research related to swine viruses and specifically to African swine fever virus. "Risk and Mitigation of African Swine Fever Virus in Feed" was published March 18 in the journal Animals. Research funding was provided by the National Pork Board.

"Since the 2013 introduction of porcine epidemic diarrhea virus into the United States, researchers have investigated the potential role of feed and feed ingredients for the transboundary spread of swine diseases," Niederwerder said. "Feed ingredients are commodities traded worldwide, and the U.S. imports thousands of metric tons each year from countries where circulating foreign animal diseases have been identified."

African swine fever, or ASF, is the most significant foreign animal disease threat to U.S. swine production, Niederwerder said. The primary goal of negative countries, such as the U.S., is to prevent ASF entry as there are no vaccines or treatments available.

"The recent introduction of ASF into historically negative countries over the last few years has heightened the risk for further spread," Niederwerder said. "Investigations in my laboratory have characterized the stability of the African swine fever virus in feed ingredients subjected to transoceanic shipment conditions, the virus's transmissibility through the natural consumption of plant-based feed, and the mitigation potential of certain feed additives to inactivate African swine fever virus in feed."

Niederwerder's latest review describes the current knowledge of feed as a risk for swine viruses and the opportunities for mitigating the risk to protect U.S. pork production and the global swine population from African swine fever and other foreign animal diseases.

Niederwerder's article looks at potential ways to reduce African swine fever virus risk through feed biosecurity as well as through both physical and chemical mitigation protocols, such as heat treatment, storage time, and antimicrobial feed additives.

"It is critically important that feed mitigation strategies continue to be investigated and adopted to reduce the risk of ASFV or other foreign animal disease entry through this route," Niederwerder said.

"Risk and Mitigation of African Swine Fever Virus in Feed"