MANHATTAN — Stephen Higgs, Kansas State University associate vice president for research and director of the Biosecurity Research Institute, is the 2020 recipient of the Harry Hoogstraal Medal for Outstanding Achievement in Medical Entomology.

The medal is an international award from the American Society of Tropical Medicine and Hygiene, or ASTMH, and honors outstanding lifelong service to medical entomology. The American Committee of Medical Entomology, or ACME, virtually presented Higgs with the award at the ASTMH annual meeting this week.

“One of the reasons that I am thrilled to receive the Hoogstraal Medal is that it is awarded by one’s peers,” Higgs said. “In my previous roles with ACME, I have presented this award to many of the recipients. This is a career award that reflects the work of many students and collaborators from around the world.”

Higgs is the first representative from K-State to receive the Hoogstraal Medal. At K-State, Higgs has directed multidisciplinary research that encompasses many aspects of vector-borne viruses, with a particular focus on mosquito-virus-vertebrate interactions. He has published with more than 650 co-authors.

“Dr. Higgs is a true international collaborator and leader who has made significant contributions to K-State’s visionary goal of becoming a Top 50 public research institution,” said Peter Dorhout, vice president for research. “His impressive body of work shows why he is deserving of this award, and we are proud to have him at K-State.”

Under Higgs’ leadership, the K-State Biosecurity Research Institute in Pat Roberts Hall has grown into a world-renowned biosafety level-3 facility that houses important multidisciplinary research, training and educational programs on pathogens that affect animals, plants and insects, as well as food safety and security. Higgs is an elected fellow of the American Society of Tropical Medicine and Hygiene and serves as the editor-in-chief of the journal Vector Borne and Zoonotic Diseases.

The prestigious Hoogstraal Medal is named after American entomologist and parasitologist Harry Hoogstraal, who lived from 1917 to 1986, and is recognized as one of the world’s foremost authorities on tick-borne diseases. The Hoogstraal Medal has included notable recipients such as Willy Burgdorfer, who discovered Lyme disease. . 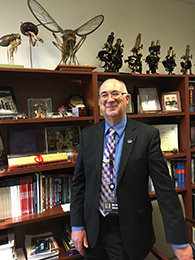 Stephen Higgs, Kansas State University associate vice president for research and director of the Biosecurity Research Institute, is the 2020 recipient of the Harry Hoogstraal Medal for Outstanding Achievement in Medical Entomology. 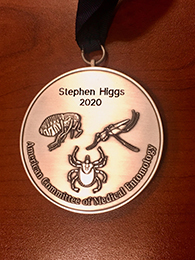