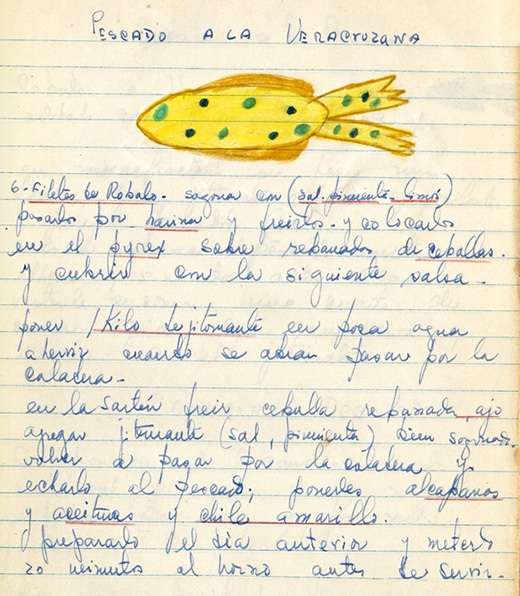 A page from a Spanish manuscript cookbook, written between the 1940s and 1960s, features a recipe for pescado a la Veracruzana, or Veracruz-style red snapper, a classic dish that incorporates Spanish and pre-colonial Mexican ingredients and cooking methods. | Download this photo.

MANHATTAN — Staff and volunteers with the K-State Libraries' Richard L. D. & Marjorie J. Morse Department of Special Collections at Kansas State University are working to transcribe more than 20 manuscript cookbooks to make them digitally accessible to the public.

The department currently owns more than 250 cookbook manuscripts dating from the late 1600s to the 21st century from multiple countries and in a variety of languages, including German, French, Spanish and Hebrew. Staff and volunteers are using From the Page, an online platform often used by universities and historical societies to crowd-source transcription of selected digital images from manuscripts. The use of this software is supported by the Morse Department of Special Collection's Jean F. Caul Access to Cookery endowment, without which this project would not be possible.

"We currently have 21 cookbooks — a total of more than 2,800 pages — available for volunteers to transcribe," said Roger Adams, cookery collection curator, associate professor and lead on the project. "The collaborative nature of this online project means that anyone in the world can view the cookbooks and help us transcribe and even translate them."

Adams said that a key goal of the cookbook transcription project is to share the wealth of cooking knowledge that K-State has access to with those both inside and outside of the university community.

Cindy Von Elling, project support staff, contributed to this effort by scanning and uploading to the website every single page from the manuscripts.

"There is a lot of satisfaction in putting the cookbooks out there for the world to see and transcribe," said Von Elling. "While we might not know who created an individual cookbook, their method of creation, organization and the recipes they selected allow us to infer things about their lifestyle and personality."

Along with Adams and Von Elling, Cliff Hight, department head and associate professor, helped guide the project. Anybody who has a passion for transcribing or translating documents can help with the cookbook project. Access the project at K-State Libraries From the Page website.

For more information about this project, contact Adams at rcadams@k-state.edu.

A key goal of the cookbook transcription project is to share the wealth of cooking knowledge that K-State has access to with those both inside and outside of the university community.