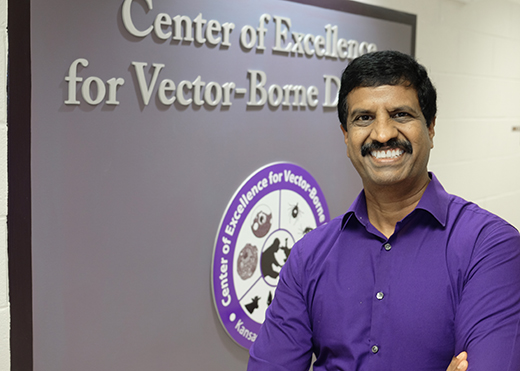 MANHATTAN — Research at Kansas State University is making progress on keeping both humans and animals safe from tick-borne diseases.

Roman Ganta, professor and director of the Center of Excellence for Vector-Borne Diseases at the College of Veterinary Medicine, and his team of researchers received two patents on technology to develop vaccine candidates against tick-borne Ehrlichia and Anaplasma infections.

Ehrlichia species pathogens transmitted by ticks can lead to ehrlichiosis, the general name for illness caused by the bacteria. Human monocytic ehrlichiosis, caused by E. chaffeensis, can lead to life-threatening illness and is associated with significant morbidity, especially in children, the elderly and people with compromised immunity.

Before the team's efforts, the only option for controlling E. chaffeensis infections and other related pathogens of Ehrlichia and Anaplasma in humans and dogs was antibiotic treatment. This showed a clear need for preventative vaccines.

"In our prior studies, we created several mutations in the tick-borne rickettsial pathogen, E. chaffeensis, which is responsible for causing ehrlichiosis disease in people and dogs," Ganta said. "Our team was the first to develop methods to generate gene mutations in obligate rickettsial bacteria belonging to the Ehrlichia species."

Gene mutations cause the inactivation of proteins in bacteria, which can render the bacteria incapable of causing disease. This knowledge led to the creation of the vaccines since mutated bacteria are ideal for inducing enough immunity to protect against infection.

"Because our mutagenesis and vaccine development methods are broadly applicable to other tick-borne pathogens causing diseases in dogs, cattle and humans, K-State filed the patents that cover our inventions for developing vaccine candidates against tick-borne infections of bacterial pathogens belonging to the Ehrlichia and Anaplasma species,” Ganta said.

The patent filings have helped Ganta generate additional support from the National Institutes of Health to expand the research on vaccine development to several related pathogens impacting human and animal health.