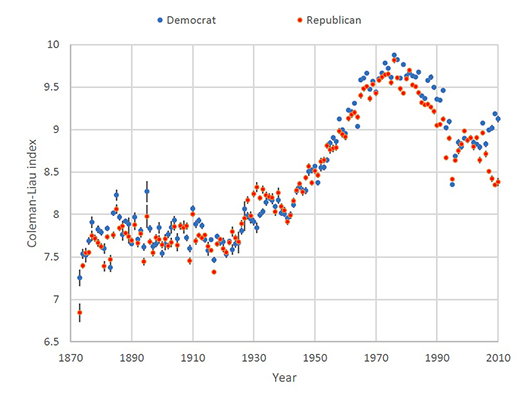 The Coleman-Liau index shows the reading level of Democratic and Republican congressional speeches in from 1873 to 2010. | Download this photo.

MANHATTAN — Research by Kansas State University shows how politicians from both major parties have changed their political speech from previous centuries.

"Based on that analysis, the algorithm determines whether a piece of text is positive, very positive, negative, very negative or neutral," Shamir said.

The algorithms also measured the frequency in which different topics were discussed. These quantitative speech elements were computed from thousands of congressional speeches made in each year, and the average of each year allowed to measure the changes in the language and topics discussed in Congress during a period of 138 years, Shamir said.

According to the study, the decline in reading level and vocabulary of the speeches can be related to the increasing presence of media — including live radio and TV coverage — in Congress beginning in the 1970s. Members of Congress started to gradually adjust their speech styles, addressing the public through the media rather than addressing their fellow legislators.

Another aspect reflected through the analysis was the partisan split, Shamir said. Starting in the mid-1990s, Republican and Democratic speeches became increasingly different from each other and also correlated with the political affiliation of the president. For instance, during the George W. Bush administration, speeches of Democratic legislators expressed more negative sentiments compared to their Republican counterparts. That difference flipped immediately after 2008, with the beginning of the Obama administration, during which Republican speeches became more negative.

"With natural language processing we can extract new knowledge from old data," Shamir said. "There is no practical way to quantify and profile such a large number of speeches without using computers."

"A data science approach to 138 years of congressional speeches"