MANHATTAN — The Honor Society of Phi Kappa Phi is recognizing a recent Kansas State University alumna who is committed to reducing food insecurity globally by empowering women who play a crucial role in the world's food systems.

Sara Gammon, May 2020 bachelor's degree graduate in agricultural economics and global food systems leadership, Drexel, Missouri, has received a 2020 Phi Kappa Phi graduate fellowship for $8,500. She is one of only 58 national recipients to receive the 2020 fellowship. She will apply it toward a one-year Master of Philosophy in development studies program at Cambridge University this fall and a one-year Master of Science in development economics at SOAS University of London.

After completing her graduate studies, Gammon plans to work in the Agricultural Development Economics Division of the United Nation's Food and Agriculture Organization, where she can focus on eliminating hunger, food insecurity and malnutrition by helping empower women in agriculture around the globe.

While these issues may seem impossible to overcome, Gammon said they can be solved through intentional interventions that are tailored to individual countries and cultures.

"If we are ever to achieve a food secure world, we must lift the world's women from poverty into prosperity," Gammon said. "Nobel Peace Prize-winning agronomist Norman Borlaug once said, 'Food is the moral right of all those born into this world.' For those around the world who are food insecure, I and others will continue to fight to fulfill Borlaug’s promise. Not a single person on Earth deserves to go to bed hungry and deprived of their moral right."

Phi Kappa Phi was founded in 1897 and is one of the oldest and most selective collegiate honor societies. It recognizes and promotes academic excellence in all fields of higher education.

Universities with a Phi Kappa Phi chapter can only nominate one candidate to the national competition each year, making the selection process highly competitive, said Jim Hohenbary, director of the university's Office of Nationally Competitive Scholarships.

"I first met Sara as an incoming freshman," he said. "Even then, she was committed to the importance of empowering women in international agricultural development, and I think her selection as a Phi Kappa Phi graduate fellow reflects the fact that Sara enthusiastically built her capacity to act on that commitment throughout her time at Kansas State University."

During her time at K-State, Gammon conducted research on the rural dairy economy in India as a 2017 Borlaug Ruan intern in association with the World Food Prize. In summer 2018, she worked as a K-State International Service Team volunteer at the Children and Youth Empowerment Center in Kenya.

She also served in numerous leadership and public service roles, including Student Governing Association director of food insecurity and president of Collegiate Farm Bureau; College of Agriculture caucus leader and senator, and vice president of political outreach and fellow for the Collegiate Farm Bureau; advisory board member and volunteer for the Cats' Cupboard; and a member of Gamma Sigma Delta. Additionally, she was a Cargill fellow from 2018-2019.

In April, Gammon was named K-State's 36th Harry S. Truman scholar — a highly competitive national award given to a select few who are committed to future careers in public service.

While at K-State, Gammon also received the David and Susan Barton Cooperative Leadership Scholarship, the Gamma Sigma Delta Outstanding First-Year Performance Award and the McKelvie Scholarship. She was a national finalist in the FFA Agriscience Research competition and received second place in the Kansas Farm Bureau Discussion Meet. She co-authored "A Brief History of Farm Management" published in the Journal of the American Society of Farm Managers and Rural Appraisers.

"Gender inequity and food insecurity are issues that can affect you no matter where you are: from the streets of Kansas City to the villages of rural India," Gammon said. "No culture or country is immune to the devastation they can bring. To tackle these issues, we must empower women and create an economic movement." 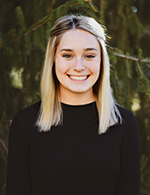 Sara Gammon, May 2020 bachelor's degree graduate in agricultural economics and global food systems leadership from Kansas State University, is a 2020 Phi Kappa Phi fellow. She is one of only 58 national recipients to receive the 2020 fellowship.