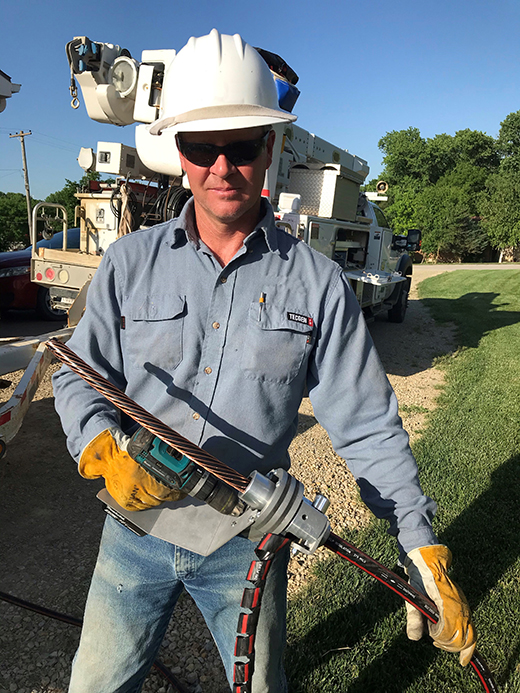 Andy Sedlacek with the new mechanically powered wire stripping device he created with the help of the Technology Development Institute at Kansas State University. | Download this photo.

MANHATTAN — Design assistance provided by the Technology Development Institute, or TDI, at the Kansas State University Carl R. Ice College of Engineering has helped bring a new version of a wire stripper used in the energy industry to market.

TDI works with a wide range of manufacturers and individuals to design, prototype, test and launch new products and technologies. One such recent project was assisting Andy Sedlacek, a lineman for a large Midwest electric power company, with developing a new tool for stripping a specialty wire. When installing new service connections, linemen use a special type of wire that requires them to strip off two to three feet of the wire's protective insulation. This was previously accomplished using basic hand tools, such as pliers, which was time-consuming and fatiguing.

Sedlacek approached TDI with a rough prototype device of how he envisioned a mechanically powered wire stripping device could function that would meet the needs of users for this type of application. TDI worked with Sedlacek to refine the concept in a computer-aided design format and make the desired changes and modifications to the existing prototype design.

"Through TDI's engineering and prototyping services, they were able to expand my ideas of a prototype and turn them into a reality," Sedlacek said.

In addition to refining the design, assistance was provided to complete a patent disclosure, create drawings and file a provisional patent on the concept to establish patent-pending status before presenting it to co-workers for design suggestions and improvements.

Once the design had been finalized, an initial prototype was produced and tested for improvements. During this period, TDI connected Sedlacek with a local patent attorney who assisted in filing the full utility patent on the device. This application was filed based on the final design from which five beta units were produced for field testing.

The new wire stripper is now commercially available to power companies across the United States and Sedlacek is seeking to establish distributor relationships to expand market penetration.

"It has been a great experience working with Andy on making his idea into a commercially available product with the assistance of Economic Development Administration and Kansas Department of Commerce grant funding," said Bret Lanz, TDI commercialization director. "The tool not only saves time but more importantly, improves safety for operators who are handling these installations frequently."

The K-State Technology Development Institute, a U.S. Department of Commerce Economic Development Administration University Center, provides a broad range of engineering and business development services to both private industry and university researchers to advance the commercial readiness of new products or technologies. Additional information is available at k-state.edu/tdi.