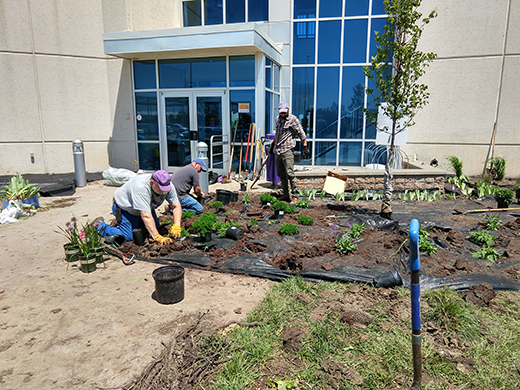 Kansas State Polytechnic's Landscape Advisory Committee is the recipient of the Wildcat Pride Award for Community Service. | Download this photo.

Now in its 34th year, K-State Polytechnic's Awards and Recognition Banquet spotlights the winners of a variety of accolades, including the most outstanding student in each degree option and the coveted Wildcat Pride Awards. The banquet was canceled this year because of COVID-19.

The banquet is an initiative of the student Programming Board, which organizes the nomination process, establishes the decision-making committee, and hosts the banquet. Kari Zook, student activities coordinator at K-State Polytechnic, helps oversee Programming Board as its advisor.

"Although it doesn't quite look the same as in the past, we still have reason to celebrate," Zook said. "Each of these winners is a shining example of the caliber of students and employees we have here on the Polytechnic Campus. It's truly an honor to work alongside this campus community. Thank you to everyone for your nominations and congratulations to all."

In all, more than 20 awards have been presented. The honors that notably focus on character traits are called the Wildcat Pride Awards and are given to those who display attributes of community service, determination and dedication. Additionally, there is an award for Most Inspirational student.

Tyler Stedman, senior in professional pilot, Wichita, is the recipient of the Wildcat Pride Award for Dedication, which recognizes a student who goes above and beyond normal duties and is committed to a particular course of thought or action. Stedman's nominator calls him a great leader with tireless dedication. He says Stedman started and earned his private pilot certificate in only one semester, which can be challenging because he had to pass ground school, an FAA written test and an oral exam. Stedman also is president of the student organization Powder Cats Ski Club, working hard to get it off the ground and onto the slopes. He has organized the group's trips by booking hotel rooms and van rentals as well as taken several hours to teach club members how to ski. Stedman's nominator says, "I have realized that whenever he sets his mind to a goal, it will be accomplished."

Dalton Ramsey, senior in social work, Salina, was selected for the Wildcat Pride Award for Determination. He was nominated by one of his instructors who has seen Ramsey's transformation over the years. The award is presented to a student who shows a quality of firmness in beliefs and actions, doesn't quit until an answer or decision is reached, and pursues life by focusing on achieving a goal with passion. According to his nominator, once Ramsey decided on his major, he became passionate about his assignments, taking courses because he wanted to learn more, not just because it was a requirement. He also pushes himself outside his comfort zone, in school and beyond. At an event with a Kansas congresswoman, he volunteered himself to ask a question about the social work field in front of a crowd of more than 500 people.

A group of volunteers that forms the campus's Landscape Advisory Committee is the recipient of the Wildcat Pride Award for Community Service. The award's purpose is to recognize a student or group who is aware of a community's needs and understands the civic responsibility of serving the community. According to the nominator, the committee decided to spruce up a variety of garden areas on campus, creating a set of guidelines to follow so each space would have similar landscaping when it is planted or renovated. The committee also chose a palette of native low-water, low-maintenance plants to reduce water and labor costs. The committee hosted Green Action Day to get other campus members involved and created a plan for future garden renovations on campus. Members of the Landscape Advisory Committee include Drew Smith, Tony Hoover, Pam Bower, Jason Graves, Rene Leiker, Kris Grinter, Ben Schaub and Bill Stout.

Caroline Tipton, junior in applied business and technology, Munden, is the recipient of the award for Most Inspirational student. This award honors a student who inspires others to achieve the highest level at which they are capable, and epitomizes the qualities of determination, dedication and service. This student must also maintain a GPA of 2.5 or above. Caroline's nominator calls her amazing, determined and strongminded. While working toward her bachelor's degree, she also is managing a young family and her nominator says even under stressful situations, Caroline remains positive and always engages others with a genuine smile and optimism.

The following students and faculty also have received awards:

Tyler Stedman, senior in professional pilot, is the recipient of the Wildcat Pride Award for Dedication.

Dalton Ramsey, senior in social work, is the recipient of the Wildcat Pride Award for Determination. 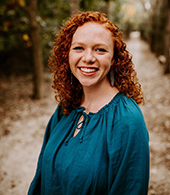 Caroline Tipton, junior in applied business and technology, is the recipient of the Most Inspirational award.