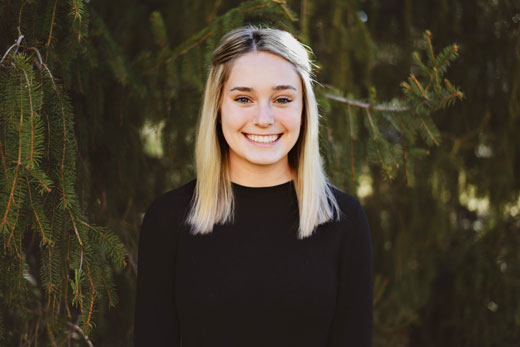 The Truman scholarship is a highly competitive national award that provides up to $30,000 for graduate study to students committed to future careers in public service. According to the Truman Foundation, 62 scholarships were awarded this year from a candidate pool of 773 students nominated by 316 colleges and universities.

Gammon is the 36th K-State student to receive the prestigious scholarship.

"I hope to eventually work for the Food and Agriculture Organization of the United Nations in the Agricultural Development Economics Division, where I can focus my research and projects on eliminating hunger, food insecurity and malnutrition through improving gender equality," Gammon said.

Gammon has seen the challenge of international gender inequality firsthand in several different settings. During summer 2017, she conducted research on the rural dairy economy in India as a 2017 Borlaug Ruan intern in association with the World Food Prize. During summer 2018, she worked as a K-State International Service Team volunteer at the Children and Youth Empowerment Centre in Kenya.

"I believe that women's empowerment is vital to moving the world forward and lifting people from poverty to prosperity," Gammon said. "I was lucky to be born with the privilege to go to school and have a career; I won the lottery of life. Because of this, I believe my life's purpose is to use my education and privilege to help those who are not as fortunate. By breaking the barriers, we can not only empower women, but we can also empower the world."

Gammon has served in many leadership and public service roles. She currently is the Student Governing Association director of food insecurity and president of Collegiate Farm Bureau. She was a College of Agriculture caucus leader and senator, and vice president of political outreach and fellow for the Collegiate Farm Bureau from 2018-2019; an advisory board member and volunteer for the Cats' Cupboard; and is a member of Gamma Sigma Delta. She also served as a member of the Model United Nations Competition Team. In addition, she was a Cargill fellow from 2018-2019 and fundraising chair for Quest Freshman Honorary from 2017-2018.

In addition to the Truman scholarship, Gammon has received the David and Susan Barton Cooperative Leadership Scholarship, the Gamma Sigma Delta Outstanding First-Year Performance Award and the McKelvie Scholarship. She was a national finalist in the FFA Agriscience Research competition and received second place in the Kansas Farm Bureau Discussion Meet. She co-authored "A Brief History of Farm Management" published in the Journal of the American Society of Farm Managers and Rural Appraisers.