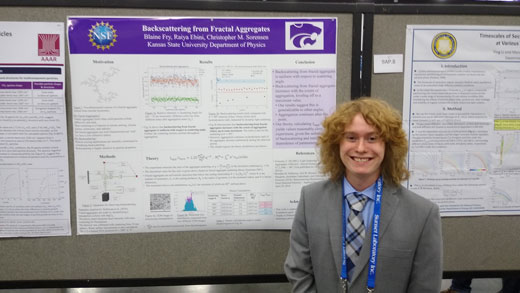 Established by Congress in 1986 to honor Sen. Barry M. Goldwater from Arizona, the Goldwater scholarship is the premier undergraduate scholarship for students interested in research careers in engineering, mathematics or the natural sciences. Awardees receive up to $7,500 annually for college-related expenses. For the 2020-2021 academic year, it was awarded to 396 students across the nation.

Fry is mentored by Chris Sorensen, Cortelyou-Rust university distinguished professor of physics, and is researching light scattering from fractal aggregates.

"Fractal aggregates are funny shapes that form when small bits of stuff collide randomly, which happens frequently in nature," Fry said. "Soot — from candles, forest fires and car engines — is a common example. Understanding how these aggregates scatter light is useful for climate science and remote sensing applications, besides being a fascinating step forward in describing scattering from arbitrary particles."

Fry's work is specifically researching backscattering: the light that scatters back toward the source. It can be very dim, making it hard to measure.

"Through his research and our personal interactions, I can attest to the fact that Blaine is very bright," Sorensen said. "He learns quickly and interacts with intelligence. He is a self-starter and self-reliant. He is inventive. He has terrific experimental intuition. His background as a kid is full of science; he has science in his bones!"

Fry is the vice president of Physics Club, a member of Astronomy Club, a participant in the University Honors Program and an avid pianist. In addition to the Goldwater scholarship, Fry is an Ellis Foundation Scholar and has received the Putnam Scholarship, A.B. Cardwell Fund Scholarship, Richard Horning Physics Scholarship, J.O. Hamilton Physics Memorial Scholarship, National Merit Scholarship, and the Al and Darline Peterson Scholarship from the Topeka Community Foundation. In addition, he was a finalist for the K-State Civic Leadership Scholarship, winner of the American Association for Aerosol Research Student Poster Competition and an Eagle Scout for Troop 59 in the Jayhawk Area Council.

A graduate of Topeka West High School, Fry is the son of Clint Fry and Cassandra Immenschuh, both of Topeka.