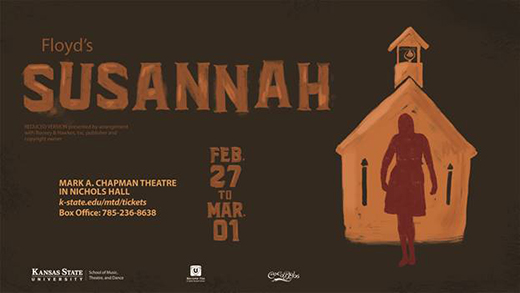 MANHATTAN — K-State Opera and K-State Theatre, both part of the School of Music, Theatre, and Dance at Kansas State University, are presenting the opera "Susannah" Feb. 27-March 1 at the Mark A. Chapman Theatre in Nichols Hall. Showtimes are 7:30 p.m. Feb. 27-29 and 2:30 p.m. March 1.

Tickets for "Susannah" are $14 for K-State students and youth under 18; $17.50 for K-State faculty and staff, seniors age 55 and over and for military; and $19.50 for the general public. Tickets may be purchased online at k-state.edu/mtd/tickets or by calling 785-236-8638. Tickets also may be purchased in person at 119 Nichols Hall one hour before showtime.

Written by Carlisle Floyd in response to McCarthyism and the Red Scare, the opera "Susannah" is based loosely on the apocryphal tale of Susannah and the Elders set in rural Tennessee. Susannah is one of the prettiest young girls in New Hope Valley, sparking jealousy among women in the town for the attention she receives from their husbands as well as hostility from her church community. One day, the church reverend seduces Susannah and is later found murdered. Her brother, Sam, is believed to be the murderer and the townspeople head to her home to drive her from the community.

The following K-State students in the cast and crew of "Susannah":

Marley Wareham, senior in music education, Whiting, as a townsperson.

From out of country: Lars Quincke, senior in applied music, Germany, orchestra.