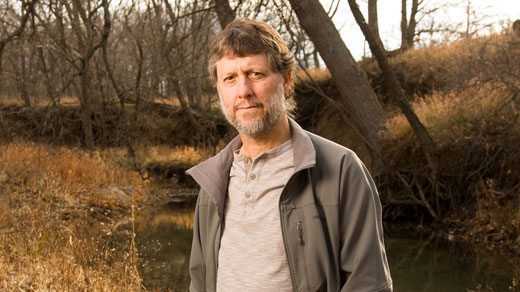 Walter Dodds, university distinguished professor of biology at Kansas State University, uses a scientific approach to rank the greatest threats to humanity in his new book, "The World's Worst Problems." | Download this photo.

"'The World's Worst Problems' goes through a series of justifications for why certain issues are the worst for the world and then takes a scientific and accounting view of deaths and suffering from those problems," Dodds said.

Using a scientific approach, Dodds, who is the Edwin G. and Lillian J. Brychta chair in biology and an expert in freshwater ecology, quantifies world problems based on actual danger and probability of deaths and human suffering. He said that by using the scientific approach, he was able to categorize problems without confirmation bias and the emotions that often come with talking about death and suffering.

"When I was young, we were getting under our desks for nuclear drills," Dodds said. "It was a huge political issue, but now kids are getting under desks for mass shooters drills even though a lot more people die from auto accidents. Action is taken on issues that people perceive are most important, but those may not actually cause the most harm to society."

In addition to ranking the problems, Dodds writes about possible solutions from a social science perspective. He includes the relative economic costs to solve each of these problems, individual behavior in the face of these problems, and how people can work together internationally to combat them.

"Part of the book is how people behave and what they perceive as being a big problem," Dodds said. "It is those problems that move toward creation of policy."

Dodds said that it is basic human nature to worry about the things that influence individuals and those around them first. This book may help people better quantify what are the actual dangers so that solutions can be found to those worst problems first.

"I hope that somehow, this book makes a difference," Dodds said. "I hope people will read it and it will give them routes to figure out how to make the world a better place."