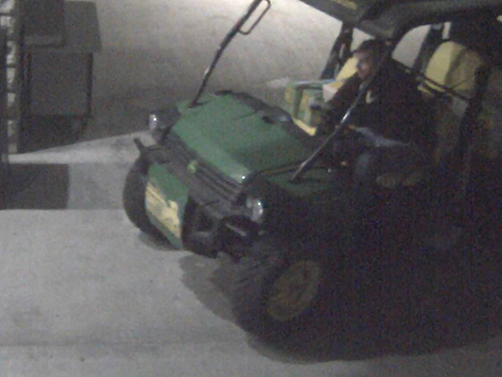 A photo of the suspect in the theft of a utility terrain vehicle from Bill Snyder Family Stadium. | Download this photo.

MANHATTAN — The Kansas State University Police Department is investigating thefts of a utility terrain vehicle and money from an ATM at Bill Snyder Family Stadium.

The incidents occurred during the early morning hours between Dec. 26 and Dec. 29, 2019. The stolen UTV was last seen on the east side of the stadium on Dec. 27 at approximately 6:20 a.m. A suspect was seen with a different UTV with an attached trailer on the west side of the stadium in a residential area at about 5 a.m. on Dec. 29. The second UTV was returned to the stadium by the suspect later that morning.

The money taken from the ATM — in $10 and $20 denominations — may smell of cleaning solution and have a yellow tint. The dried bills may be brittle but wrinkled.

K-State Police have released photos of two suspects, vehicles in and around the area at the time of the incident, cash left at the scene, and a stock photo of the stolen UTV.

Police request that anyone with information about these cases call 785-532-6412 or email police@k-state.edu. Police are especially interested in home security video and witness accounts from the neighborhood surrounding the stadium that may have recorded or witnessed any related activity. 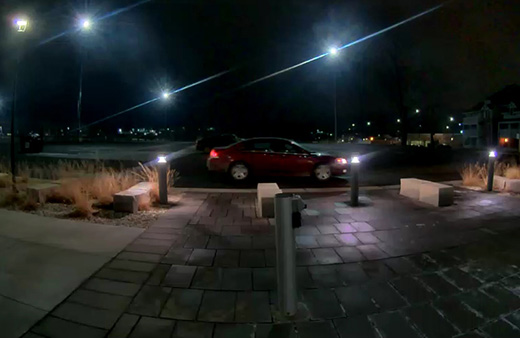 Kansas State University Police are seeking information about this car and the theft of a UTV and cash from an ATM at Bill Snyder Family Stadium. | Download this photo.

Anyone with information about the thefts is asked to call the Kansas State University Police Department at 785-532-6412 or email police@k-state.edu.

Photo of a suspect in the theft of a UTV and ATM cash from Bill Snyder Family Stadium. 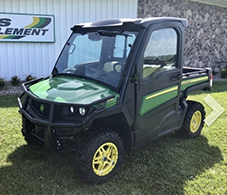 This is a photo of the type of UTV taken from Bill Snyder Family Stadium.

Money taken from the ATM at the football stadium may smell of cleaning solution and have a yellow tint.