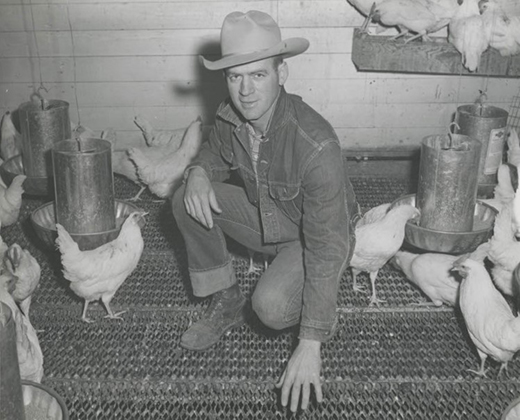 Patrick Sauble on his egg farm, known as Pat and Mary's Cackleberries, in this photo from the 1960s. | Download this photo.

MANHATTAN — A new book from the Chapman Center for Rural Studies at Kansas State University is a history of life on a prominent Flint Hills ranch through the years.

"Sauble: Stories from the Flint Hills" is co-authored by Patrick Henry Sauble, a longtime rancher and a K-State alumnus, and Bonnie Lynn-Sherow, K-State associate professor of history and director of the Chapman Center in the College of Arts and Sciences. It was published in 2019 by Mennonite Press in Newton. It is the third book by the center.

A three-year project, "Sauble: Stories from the Flint Hills" is a collection of short stories and some tall tales told by Patrick Sauble over his lifetime as a rancher near Cedar Point. Sauble was born in Newton in 1921 to rancher John Sauble. His grandfather, David Sauble, was one of the earliest settlers in the Flint Hills, having ridden to Kansas with his friend Pete Hoover in the 1850s. The friends worked cattle across south central Kansas, knew trailblazer Jessie Chisholm and hid from Indians in a dugout on what became the Sauble ranch. Today, the DS Ranch is the oldest continuously operating ranch in Kansas and among the oldest in the United States.

Sauble grew up hearing the family stories of his father, grandfather and extended family members. He started retelling the stories himself while still a boy on the ranch. Sauble attended K-State, then called Kansas State Agricultural College, from 1939 to 1942 before enlisting in the U.S. Air Force as a pilot. He had learned to fly while a student at K-State, taking flying lessons for $20 at the old municipal airport. He went on to fly for the next several years, transporting troops from one end of the country to the other as World War II wound down.

In 1946 he returned to the ranch and took over from his father. When the ranch was threatened by condemnation for flood control from the 1940s to the 1970s, Sauble became an outspoken conservationist. He was recognized by the governor with a Water Legacy Award in 2017 — the only recipient ever given the award for preventing a water project instead of promoting one. Together, with his daughter and son-in-law, Sauble managed the DS Ranch right up until his death at age 98 on Dec. 7, 2019, the 79th anniversary of the attack on Pearl Harbor.

Lynn-Sherow was encouraged by Sauble's family and many friends to record his stories for a potential book.

"As soon as I met Pat, I knew this was something I had to do — not just for him, but for everyone who loves the Flint Hills," Lynn-Sherow said. "Pat was a rare treasure and incredible ambassador for rural Kansans and their ties to K-State."

Lynn-Sherow said her students were excited about the book so it became a collaborative effort and, in many ways, a race against time.

"This project ticked all the boxes for our work at K-State," she said. "We were able to highlight the flavor of rural life in Kansas while providing undergraduates with research and transcription experience and digital training as we scanned and saved a major archival collection."

The project also involved deep engagement with the residents of Chase County who provided information for the book, Lynn-Sherow said.

In keeping with the Chapman Center's mission, "Sauble: Stories from the Flint Hills" will soon be made available for purchase at the Pioneer Bluffs Ranching Heritage Center near Matfield Green, with all proceeds going to Pioneer Bluffs. It is also available now from the center by contacting 785-532-0380 or chapmancenter@k-state.edu.

More information on the center also is available on Facebook at facebook.com/chapmancenter/. 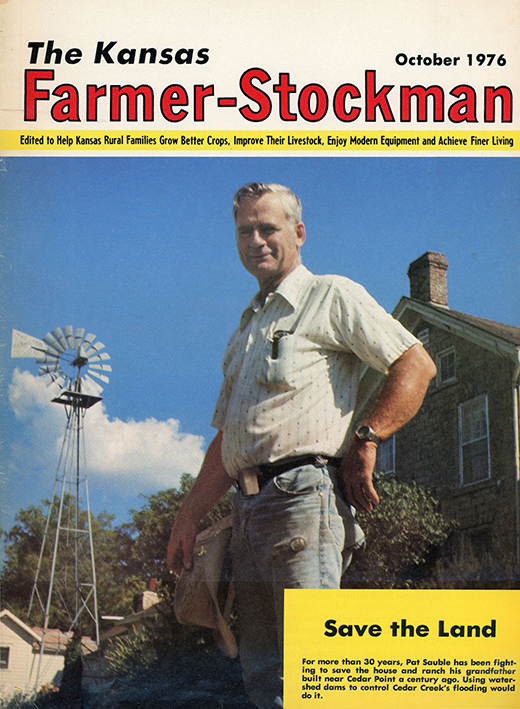 Flint Hills rancher Patrick Sauble is featured on the cover of the October 1976 issue of The Kansas Farmer-Stockman for his conservation efforts. | Download this photo.

The cover of "Sauble: Stories from the Flint Hills," a new book by Patrick Sauble, a longtime Flint Hills rancher, and Bonnie Lynn-Sherow, associate professor of history and director of the Chapman Center for Rural Studies at Kansas State University.

"As soon as I met Pat, I knew this was something I had to do — not just for him, but for everyone who loves the Flint Hills. Pat was a rare treasure and incredible ambassador for rural Kansans and their ties to K-State."

— Bonnie Lynn-Sherow, associate professor of history and director of the Chapman Center for Rural Studies