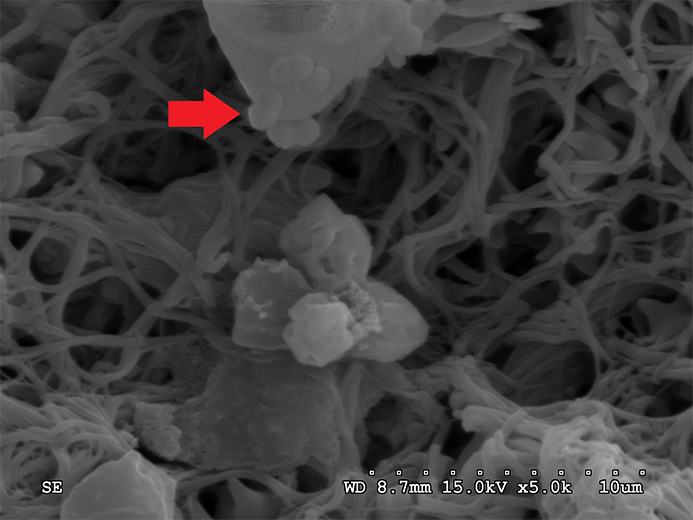 This is an electron micrograph of Mannheimia haemolytica in a bovine lung. Researchers found that first treatment with a bacteriostatic antibiotic followed by retreatment with a bactericidal antibiotic was associated with a higher frequency of multidrug-resistant bacteria isolated from field cases of Bovine Respiratory Disease submitted to a veterinary diagnostic laboratory. | Download this photo.

MANHATTAN — A new study from Kansas State University on the treatment of non-responding cases of bovine respiratory disease, known as BRD, conducted by Hans Coetzee and his collaborators from Iowa State University, sheds light on the relationship between drug treatments and the emergence of antimicrobial resistance.

The study, "Association between antimicrobial drug class for treatment and retreatment of bovine respiratory disease (BRD) and frequency of resistant BRD pathogen isolation from veterinary diagnostic laboratory samples," was published in the December 2019 issue of the journal PLOS ONE.

"Bovine respiratory disease is one of the most important diseases facing beef cattle producers in the United States with economic losses estimated to approach $1 billion a year," Coetzee said. "Antibiotics are critical to minimize losses associated with BRD caused by bacterial infections."

Antibiotics that are used to treat BRD are broadly classified into two groups: namely those that prevent growth of the bacteria — i.e., bacteriostatic — and those that kill the organism — i.e., bactericidal. Although 90% of BRD relapses are reported to receive retreatment with a different class of antimicrobial, the impact of antibiotic selection — bactericidal or bacteriostatic — on disease outcomes and the emergence of antimicrobial resistance has not been investigated, according to Coetzee.

The focus of the study is determining the association between antimicrobial class selection for treatment and retreatment of BRD relapses and antimicrobial susceptibility of Mannheimia haemolytica, Pasteurella multocida and Histophilus somni.

Pathogens were isolated from samples submitted to the Iowa State University Veterinary Diagnostic Laboratory from January 2013 to December 2015. A total of 781 isolates with corresponding animal case histories, including treatment protocols, were included in the analysis.

"Our overall interpretation of the data suggests that there is direct association between the number of treatments to which an animal was exposed and the emergence of antibiotic resistance in samples submitted to a veterinary diagnostic laboratory for analysis," Coetzee said. "In addition, these exploratory data suggest that BRD treatment protocols involving first-line treatment with a bacteriostatic antibiotic followed by second-line treatment with a bactericidal antibiotic may increase the probability of isolating BRD bacteria that are resistant to antibiotics."

While this observation suggests that consideration should be given to the mechanism of action of the antibiotic when selecting drugs for retreatment of non-responding cases of BRD, Coetzee said further research is needed to determine the clinical relevance of this finding in livestock production systems.

Coetzee is a professor and head of the anatomy and physiology department at the College of Veterinary Medicine. He has published 160 peer-reviewed scientific papers and has received more than $10 million in research funding.