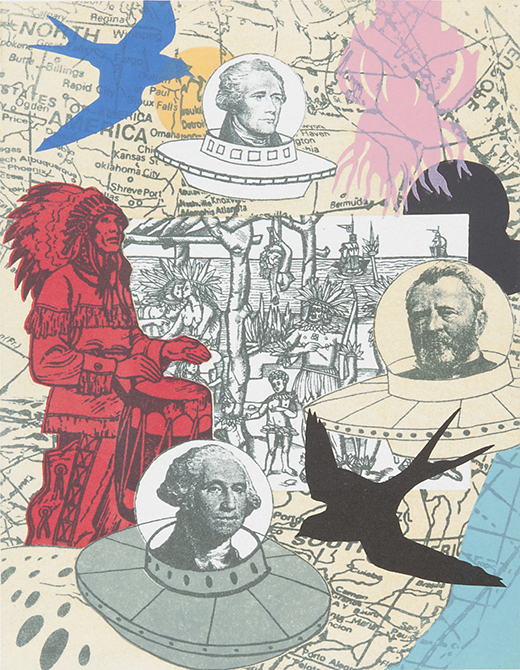 Norman Akers' "New Company," a 2011 monoprint, is among the artworks to be displayed in the new Beach Museum of Art exhibition "Voices of the West." Akers, a member of the Osage Nation, is an art professor at the University of Kansas. | Download this photo.

MANHATTAN — Cowboys and gunslingers may have gotten most of the attention in many of the TV shows, movies and novels about the American West, but a new Marianna Kistler Beach Museum of Art exhibition puts the spotlight on other groups who called this region home.

"Voices of the West" highlights the indigenous inhabitants, women and other groups of this region who were not often depicted — or depicted negatively — in popular culture. The exhibition runs from Feb. 4 to July 25 at the Kansas State University art museum.

"This selection of works from the museum's collection presents alternative perspectives on the historic and modern American West," said Liz Seaton, Beach Museum of Art curator. "Images by American Indian artists, for example, address the displacement of Native peoples and the challenge of maintaining cultural traditions. Some artworks highlight the idealization of the Western landscape as well as its overdevelopment, while other works reassess the iconic status of historical Western figures."

Two paintings by the Potawatomi artist Louis ShipShee included in the exhibition are recent gifts to the museum and have received conservation treatment at the Gerald R. Ford Conservation Center in Omaha. The paintings are "Custer," a mid-20th century portrait of the famous Maj. Gen. George Armstrong Custer based on a photograph by Civil War photographer Mathew Brady, and "The Captured Flag," an oil on canvas also from the mid-20th century showing a Native American waving an American flag from the 1870s, apparently captured in battle. Both paintings were given to the museum in memory of James W. Schmidt.

Museum visitors will also get the chance to help support conservation efforts on a third painting in the exhibition, Edward Moran's "Western Landscape." This oil on canvas is from 1866 and was a gift to K-State's art collection by Charles V. Kincaid in 1963. The canvas suffers areas of loss and discoloration. A collection box in the gallery will be available for donations to help support treatment at the Omaha conservation center.

The following are events related to the "Voices of the West" exhibition; all will be at the museum and are free and open to the public:

• A screening and post-film discussion of "The Only Good Indian" at 5:30 p.m. Tuesday, Feb. 20. The film, directed by Kevin Willmott, a University of Kansas film professor, is a story about the harsh federal boarding schools many American Indian children were forced to attend. Parental discretion is advised. Amber Neely, a K-State linguistic anthropologist, and others will comment and invite audience discussion after the screening.

• The panel discussion "Native American Perspectives" will be at 5:30 p.m. Thursday, Feb. 27, and will provide a closer look at historic and contemporary Native American imagery in the "Voices of the West" exhibition. Panelists will include Lauren Ritterbush, K-State professor of sociology; Norman Akers, University of Kansas art professor and member of the Osage Nation; and Oklahoma-based artist Minita Crumbo Halsey, daughter of the late artist Woody Crumbo, Potawatomi Nation. 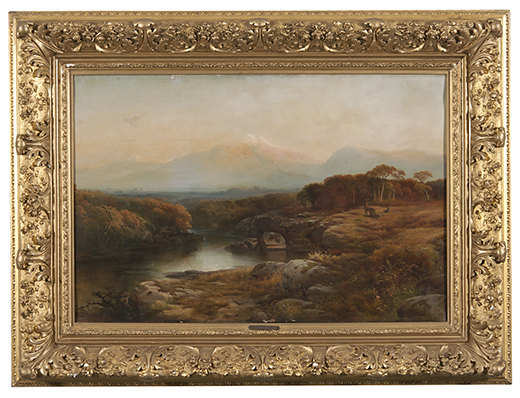 "Western Landscape" by Edward Moran is a gift to Kansas State University and is part of the new Beach Museum of Art exhibition "Voices of the West." Visitors to the exhibition will have the opportunity to make donations to pay for conservation of the 1866 oil on canvas. | Download this photo.