MANHATTAN — A new research grant for Yulan Xiong, assistant professor of anatomy and physiology at the Kansas State University College of Veterinary Medicine, focuses on gaining a better understanding of the physiological causes of Parkinson's disease.

The National Institute of Neurological Disorders and Stroke awarded Xiong with more than $1.6 million for a five-year project, "Molecular regulation of LRRK2 in Parkinson's disease." This award is from the research project grant program R01 at the National Institutes of Health.

"According to the National Institutes of Health, 1 million people in the United States are suffering from Parkinson's disease," Xiong said. "Unfortunately, there is no cure or proven therapy for this disease."

"The cardinal symptoms of the disease are caused by the loss of brain cells — called dopaminergic neurons — in the midbrain and deficits in the striatum, which is the area of the brain that controls motor function and reward systems," Xiong said.

Mutations in the Leucine-rich repeat kinase 2 gene, or LRRK2, account for up to 40-50% of Parkinson's disease in certain populations and are the most known common causes for the disease, Xiong said.

"Given its strong genetic links and compelling drug ability, LRRK2 represents a clear target for therapeutic development," she said. "But how the function of LRRK2 is regulated in Parkinson's disease is poorly understood."

The objective of Xiong's study is to answer that question. Her group will first identify and characterize the key regulator for the LRRK2 gene, then determine how it regulates LRRK2 cellular function, and explore how this regulation affects LRRK2 function in striatum and related motor function in mammalian model systems.

"We believe new knowledge about this aspect of LRRK2 biology will advance our understanding of the physiologic and pathophysiologic actions of LRRK2," Xiong said. "We hope it leads to the potential identification of novel targets for future pharmacologic intervention and treatments for Parkinson's disease." 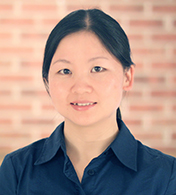 Yulan Xiong will use a $1.6 million grant from the National Institutes of Health to study Parkinson's disease. Xiong is an assistant professor of anatomy and physiology atthe Kansas State University College of Veterinary Medicine.