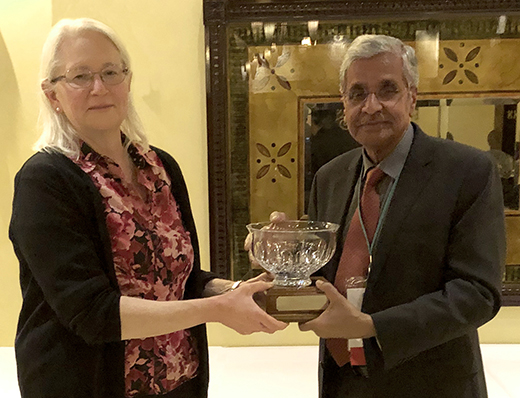 From left, Amelia Woolums, president of the American College of Veterinary Microbiologists and professor of microbiology at Mississippi State University, presents the Distinguished Microbiologist of the Year Award to Kansas State University's T.G. Nagaraja at the organization's banquet in Chicago. | Download this photo.

"I am truly humbled by the award," Nagaraja said. "It is special because this recognition is from my peers. I have had a lot of help in my research career — some outstanding graduate students, very good laboratory help and excellent collaborators."

Nagaraja is a member of the diagnostic medicine and pathobiology department faculty in the K-State College of Veterinary Medicine. His appointment is 70% research and 30% teaching. His research expertise is in gut microbiology, focused primarily on the role of rumen microbes in function and dysfunction of the rumen, and on foodborne pathogens, particularly Shiga toxin-producing Escherichia coli and salmonella in cattle. His research is a blend of basic and applied studies and involves collaborative interactions with epidemiologists, molecular biologists, pathologists and ruminant nutritionists.

Nagaraja and his graduate students have been responsible for several seminal findings, including describing that the feeding of distiller's grain was positively associated with prevalence of E. coli O157, a major foodborne human pathogen, in cattle. In addition, he and his associates were the first to identify and describe the role and importance of the toxin leukotoxin, produced by Fusobacteroum necrophorum that causes liver abscesses in cattle. Nagaraja's group also developed an experimental model to study liver abscess in cattle by inoculating F. necrophorum via ultrasound-guided, percutaneous catheterization of the portal vein, which allowed for the demonstration that leukotoxinis can be used to protect the animal against liver abscesses. This led to the development of a U.S. Department of Agriculture-licensed leukotoxoid-based vaccine to prevent liver abscesses in feedlot cattle.

In addition, Nagaraja has developed experimental models to induce bloat and acidosis, two major digestive problems in cattle. The experimental models were instrumental for testing and identifying new compounds to control bloat and acidosis in feedlot cattle, describing the effects of antibiotics like lasalocid, monensin and virginiamycin on ruminal microbes and fermentation to better understand their modes of action.

Nagaraja and his associates have produced more than 216 peer-reviewed articles, 115 invited national and international presentations, 19 book chapters and 20 review papers and symposium proceedings on food safety research. As a mentor, he has supervised 19 doctoral students, 21 master's students and four Master of Public Health students. His work has resulted in eight U.S. patents.

Among Nagaraja's many awards and honors include K-State's Commerce Bank and W.T. Kemper Foundation Distinguished Graduate Faculty Award in 2018; the Dr. Ron and Rae Iman Outstanding Faculty Award from the K-State Alumni Association in 2012; being named among the top 150 scientists in Kansas by Ad Astra Kansas in 2011; and the Irvin Youngberg Award for Applied Sciences, one of the Higuchi-KU Endowment Research Achievement Awards, in 2010. Nagaraja also received the 2001 Pfizer Animal Health Award for Research Excellence from the College of Veterinary Medicine.

The American College of Veterinary Microbiologists. is a specialty organization recognized by the American Veterinary Medical Association for certification of veterinarians with special expertise in microbiology. An ACVM diplomate is a veterinarian of good moral character who has satisfactorily completed the examination and has been elected to membership by a majority vote of the college's board of governors. Veterinary microbiology includes the fields of bacteriology, mycology, immunology, virology and parasitology as they apply to veterinary medical science.