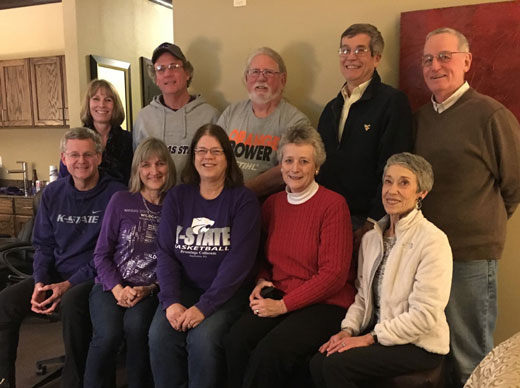 MANHATTAN — A family that has invested its time, talents and dedication to Kansas State University for six generations has earned the title of K-State's 2019 Family of the Year.

The Jane Dodge Works family will be recognized as the university's Family of the Year at Family Day on Saturday, Oct. 26, during the football game against Oklahoma at Bill Snyder Family Stadium.

"Chimes Junior Honorary, which selects the Family of the Year and sponsors the annual competition, considers the family's affiliation with K-State, dedication to the university, and how the family fits its own definition of family," said Janie Failor, Chimes co-chair of selection and events. "The Works family has been dedicated to K-State for more than 152 years, and we are so excited to honor them as the 2019 Family of the Year."

According to the family's application, while Jane Works always said her children could attend any university, her passion and loyalty to K-State were always apparent. Family members would often hear stories of how she drove a horse-drawn wagon into Manhattan each morning before her college classes to deliver milk to K-State's dairy and how she met and fell in love with George after he offered to put away her microscope after a chemistry lab class in Willard Hall.

"Jane Dodge Works espoused a family culture that encouraged her family members to be more than just students while at K-State," said John Works, Jane Works' nephew, who nominated the family for the award. "She encouraged her children and grandchildren to contribute and invest their time and talent to enhance both their K-State experience and better K-State for students who would follow."

The Works family also has shared its Wildcat pride across the globe in countries such as Australia, Bolivia, Cambodia, Chile, China, Morocco, Nepal, New Zealand, Peru, South Africa, Tanzania, Turkey and Vietnam. Family members have helped arrange for international students to visit K-State and meet with advisors, and provided other logistical and financial support to them.

"The Works family has influenced K-State greatly through its commitment and devotion to the university," said Dylan Roney, Chimes events and selections co-chair. "We are fortunate to have amazing support from involved alumni and families who make a lasting difference at K-State."

The following members of the family will accept the award: