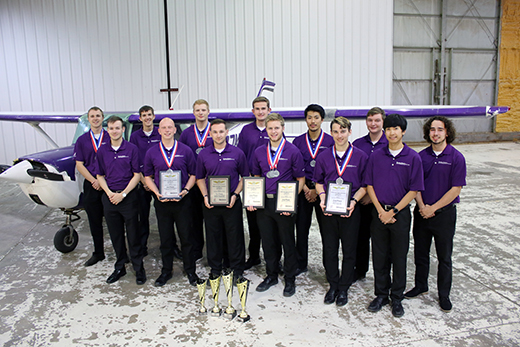 SALINA — The flight team at Kansas State University Polytechnic Campus is advancing to nationals in the spring after placing second in its region and earning several individual honors during an annual collegiate aviation competition.

Along with six other schools, the Kansas State Polytechnic Flight Team attended Region VI of the National Intercollegiate Flying Association Safety and Flight Evaluation Conference, also known as NIFA SAFECON. Conducted Oct. 16-19 at the Council Bluffs Municipal Airport in Council Bluffs, Iowa, the competition consisted of both ground and air events with participants having the opportunity to win individual awards and receive team placings — which mean a guaranteed spot at nationals for the top three teams.

"We feel really good about our performance at regionals because it demonstrates our commitment and self-motivation," Hinnen said.

Ten ground and flight events make up NIFA SAFECON. They range from participants determining different types of aircraft from ambiguous photos to attempting to hit a ground target from the air to landing a plane as close as possible to a specific line painted on the runway.

Thirteen members competed for Kansas State Polytechnic at regionals and more than half of them scored in the top 10 in various events. The following students, all majoring in professional pilot, are members of the flight team. Included are individual placements if earned:

From out of country: Satoru Okada, junior, Yokohama, Japan, fifth in Unlimited Navigation.

"This is such a close-knit group that truly cares for one another. They push each other, encourage each other, and look out for one another," said Julie Rowe, student programming and career services coordinator at Kansas State Polytechnic who serves as the team's staff advisor. "While aviation is not my specialty, you don't have to be an expert to know they love what they do. It's been inspiring to watch how hard they work."

Along with competing annually, the flight team uses its student organization as a way to connect the community with aviation. Throughout the year, the team is a part of several campus events like Open House and Candy Canes and Airplanes, and conducts two aviation camps for kids and one for high school students in the summer. These events also help raise money for the team's expenses at regionals and nationals.

For more information on the flight team, including sponsorship, contact Rowe at 785-826-2971 or jarowe@k-state.edu.

Flight team captain Marc Hinnen was awarded the Top Pilot honor at the National Intercollegiate Flying Association SAFECON Region VI competition and was the second-highest scoring contestant out of 80 participants. | Download this photo.