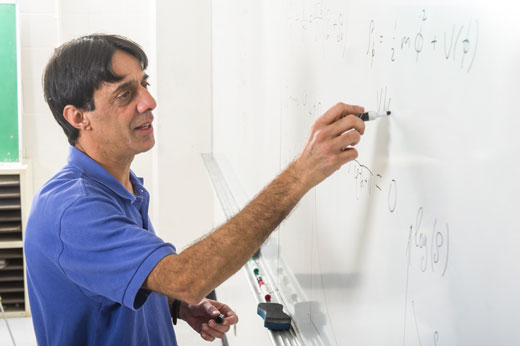 MANHATTAN — A Kansas State University physicist will shed light on the mysteries of dark matter, dark energy and the expanding universe in a public non-technical lecture on the Manhattan campus.

Bharat Ratra, university distinguished professor in physics, will present "The Accelerating Expanding Universe: Dark Matter, Dark Energy, and Einstein's Cosmological Constant, or Why Jim Peebles Was Awarded Half of the 2019 Physics Nobel Prize," at 4:30 p.m. Tuesday, Nov. 5, in 102 Cardwell Hall. Ratra will explain why dark energy is the leading candidate responsible for speeding up the universe's expansion.

This lecture will be of interest to all — regardless of physics background knowledge, Ratra said. Refreshments will be available at 4:15 p.m. in 119 Cardwell Hall.

Ratra worked as a postdoctoral fellow with James Peebles, professor at Princeton University and recent Physics Nobel Prize winner for theoretical discoveries in physical cosmology, including work on dark matter and the cosmological constant — a special form of dark energy. The two have published several papers together. In 1988, Peebles and Ratra generalized the concept of dark energy to allow it to be dynamical — that is, to allow change in time and variation in space.

In Ratra's talk, he will discuss why cosmologists think dark energy and dark matter are by far the main components of the universe's current energy budget — even though dark energy and dark matter have not yet been directly detected. According to Ratra, the data currently available has helped cosmologists develop a standard measurable and predictive model of how the universe was created and how it developed into the complex structure seen today. Ratra will also discuss the basic physics and the history of ideas — many developed by Peebles — on which this model of cosmology is based.

"Dark energy is a major part of the modern origins story," Ratra said. "In the late-1990s, people discovered that the expansion of the universe was accelerating or speeding up. To accept this and keep with Einstein's Theory of General Relativity, there has to be something that is making more and more space and spreading it out faster and faster and so speeding up the expansion of the universe. Dark energy does that."

Ratra said that we can't see dark energy because it doesn't react with light, which is how it got the "dark" part of its name, and the "energy" part of the name distinguishes it from the dark matter. While the cosmological constant — dark energy that does not vary in time or in space — is consistent with current measurements, the technology to measure dark energy isn't advanced enough yet to be able to tell whether it is dynamical.

Many organizations — including Kansas State University — are working in collaborations to build new ground-based and space-based experiments to do more precise measurements. These devices should start collecting data in the 2020s and Ratra said these new data should clear up some cosmological mysteries and help advance the field of physics. Cosmology is an exciting field to work in right now, because while rapid progress is being made, there still is much that remains to be discovered and understood, he said.

According to Ratra, while it is not yet clear what such theoretical research will lead to, the new devices being built to collect, process and analyze data needed to test these theoretical ideas will result in technological breakthroughs with more immediate economic consequences.

"People look at the night sky and find it really beautiful — artistically and emotionally," Ratra said. "It is also beautiful and important to better understand — physically and mathematically — the structures we see around us. Improvements in technology that lead to more and better-quality measurements will allow us to rule out some current theories and result in improved theories that better describe the real world."