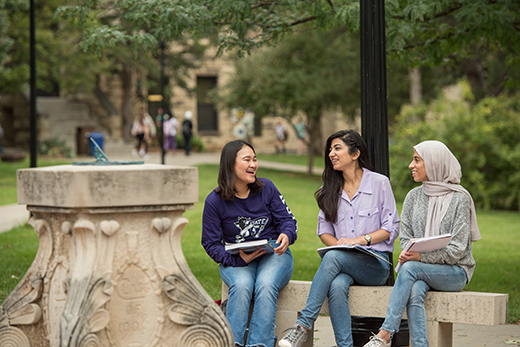 For the sixth year in a row, Kansas State University is the recipient of the Higher Education Excellence in Diversity Award, presented by Insight Into Diversity magazine. | Download this photo.

MANHATTAN — Kansas State University is again earning national recognition as one of the top higher education institutions for diversity and inclusion.

Insight Into Diversity magazine has awarded the university with the 2019 Higher Education Excellence in Diversity, or HEED, Award. K-State has received the award every year since 2014. The university is one of 94 higher education institutions selected this year for the national honor and the only Kansas institution to receive the designation.

"Kansas State University's mission as a land-grant university encourages diversity and learning opportunities created through societal differences," said Richard Myers, K-State president. "As we embrace our differences, we create a harmonious workplace and educational institution of choice. "Being a 2019 HEED Award recipient symbolizes that we remain true to our mission."

The Insight Into Diversity HEED Award, open to all colleges and universities across the U.S. and Canada, measures an institution's level of achievement and intensity of commitment in regard to broadening diversity and inclusion on campus through initiatives, programs and outreach; student recruitment, retention and completion; and hiring practices for faculty and staff.

"Kansas State University is continuously moving forward together with our students, faculty and staff toward inclusive excellence," said Bryan Samuel, chief diversity and inclusion officer at K-State. "One of the most impactful endeavors we can achieve universitywide is to employ a diverse and engaged workforce and recruit and retain a diverse and engaged student body. Inclusiveness creates growth, so as we unlock our potential and manage differences, we create a harmonious workplace and educational institution of choice."

K-State's dedication to diversity and inclusion can be traced back to the university's founding in 1863. The university then, as now, provided full educational privileges with open enrollment to all students, regardless of gender, race or creed. Samuels said this dedication has continued to grow over the university's 156 years, as evidenced by the many diversity and inclusion initiatives offered today, highlighted by the KSUnite movement established in November 2017.

"KSUnite encourages individuals to discuss how to develop an inclusive community, have meaningful conversations and respond to healthy discussion," Samuels said.

This year's KSUnite will be Wednesday, Nov. 6.

To attract a diverse and inclusive student body, K-State invests in many programs such as Project IMPACT, which is designed to recruit, retain and graduate multicultural and first-generation students. Other programs offered by the university, such as the First Scholars, McNair Scholars and Developing Scholars programs, PILOTS and the Women in Science and Multicultural Engineering programs, also assist with the academic success and retention of students from underrepresented and multicultural backgrounds.

In addition, K-State's Office of Diversity and Multicultural Student Affairs, home to Project IMPACT, assists with intercultural learning to build a more inclusive K-State family and promotes a strong multicultural student life, including through organizations such as the Hispanic American Leadership Organization and the Black Student Union, which has been named best in the Big 12 Conference.

K-State's LGBT Resource Center, which serves students, faculty, staff and community members, was recently made part of the Office of Diversity and Multicultural Student Affairs and has helped K-State be recognized as a Top 25 school in the nation for LGBTQ inclusion in policies, programs and practice by Campus Pride. K-State also is one of the Top 30 schools in the nation for being LGBTQ friendly.

Among K-State's other diversity and inclusion initiatives include the President's Commission on Multicultural Affairs and the appointment of diversity point people in each K-State college and at the K-State Libraries.

The HEED Award is just one of many recent honors K-State has received for diversity and inclusion. In 2018, the university also was named the No. 2 college town in the nation by Livability.com and was on Business Insider's Top 20 Best College Towns list. K-State has received the Campus Pride Best of the Best LGBTQ Friendly Colleges and University award for three consecutive years, the Insight into Diversity Inspiring Programs in STEM Award in 2018, College Choice's 50 Best Colleges for LBGTQ Students in 2017, The Advocate magazine's Top 10 Trans-supportive Colleges in the U.S. in 2017, and a Compete Sports Diversity Award in 2017.