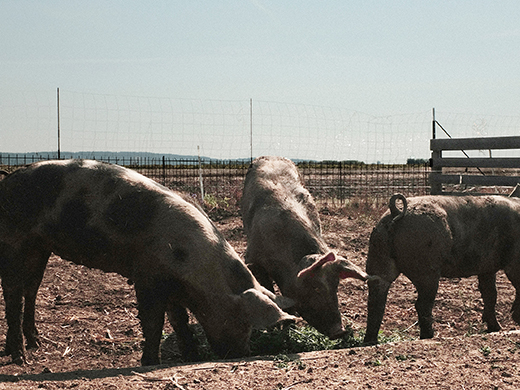 The research team, headed by Megan Niederwerder, assistant professor of diagnostic medicine and pathobiology in the College of Veterinary Medicine, looks at the degradation of African swine fever virus in animal feed ingredients to understand the potential for disease spread through contaminated feed.

Up to now, data has been limited. Niederwerder's latest study, "Half-Life of African Swine Fever Virus in Shipped Feed," is now available online in the journal Emerging Infectious Diseases. It examines the possible risk of African swine fever virus spreading to the United States through imported feed. The study provides more accurate half-life measurements that confirm the virus can survive a simulated 30-day transoceanic voyage in contaminated plant-based feed and ingredients.

"This study provides additional evidence supporting the potential risk that feed may play in the transboundary movement of African swine fever," Niederwerder said. "Our latest work provides robust half-life estimates, which include standard errors and confidence intervals, and characterizes the stages of viral decay over time for African swine fever virus in animal feed ingredients."

Detailed analysis shows that the half-life of African swine fever virus in feed ranges from 9.6 to 14.2 days after exposure to varying temperature and humidity conditions simulating transoceanic shipment. This means it would take approximately two weeks for the total viable virus concentration to decay by half its original count under the conditions of a transatlantic voyage. Niederwerder said that all feed matrices provided a more supportive environment for viral stability when compared to media, where the shortest half-life was calculated.

The new study expands on Niederwerder's previous work confirming the likelihood of African swine fever transmission through feed and can be used to implement science-based management practices such as storage time to reduce this risk.

"Transmission of swine viruses through feed has been recognized as a risk since around 2013, but the probability of African swine fever virus infection through plant-based feed was unknown until our publication earlier this year," Niederwerder said. "Our research reports novel data and important quantitative information that can be incorporated into risk models for introduction and mitigation of African swine fever virus through imported feed ingredients."

Over the last year, African swine fever virus has emerged on new continents and spread to historically negative countries. If the virus can survive shipments overseas, this provides an opportunity to infect swine in the United States and other countries through imported feed, which would be devastating to U.S. pork production.

African swine fever is now considered endemic in China, where the world's largest population of pigs live. Chinese production of pork is estimated to be cut by 25% by the end of the year. The disease has also spread to several other Asian countries and recently to Western Europe.