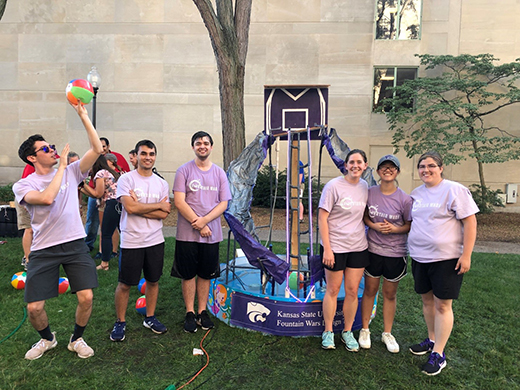 MANHATTAN — It was nothing less than the best for students of the Kansas State University Fountain Wars Team in 2019. The creative design group from the Carl R. Ice College of Engineering brought home first-place honors in a recent international competition.

For the ninth time in the past 10 years, a team from K-State has finished in the top three in the Fountain Wars Competition, a segment of the G.B. Gunlogson Student Environmental Design Competition.

The outdoor event is a hands-on, real-time design contest in which students construct and model a water fountain entry before judges at the American Society of Agricultural and Biological Engineering's annual international meeting, this year July 7-8 in Boston.

"We couldn’t be more pleased with the outcome," said Trisha Moore, team adviser and assistant professor of biological and agricultural engineering. "The students put in many hours of planning and testing design concepts in preparation for the competition. To bring home first place is such a validation of that effort."

Awards are based on combined scores for written report, video abstract, oral presentation, construction, technical tasks and an aesthetic display. Inspired by the octagonal shape of their fountain’s support structure, team members incorporated a K-State Wildcats basketball theme for their aesthetics display. Their interactive display included purple LED lights controlled with an app the team had programmed.

"We made a lot of changes this year that allowed us to grow and set ourselves up for a great showing at competition," said Jessica Stanton, May 2019 graduate in biological systems engineering, Shawnee, and team president.

This year's technical tasks included the Boston Beach Ball Marathon where teams were required to propel a beach ball around the outer edge of the pool portion of their fountain for a half-circle, where the ball was then picked up out of the pool by a water stream and elevated to a height of at least 5 feet above the edge of the pool before returning to the starting position, where it was then propelled again for a half-circle but in the opposite direction. The team completing the most cycles in three minutes received the high score. The K-State Fountain Wars team scored highest in this task.

The second technical task, the Beach Ball Balancing Act, required balancing up to six beach balls on streams of water within the pool area. The team who balanced the most balls for the longest time during the three-minute contest received the highest score. The K-State team placed second in this event.

The following students are members of the 2019 Fountain Wars Team: 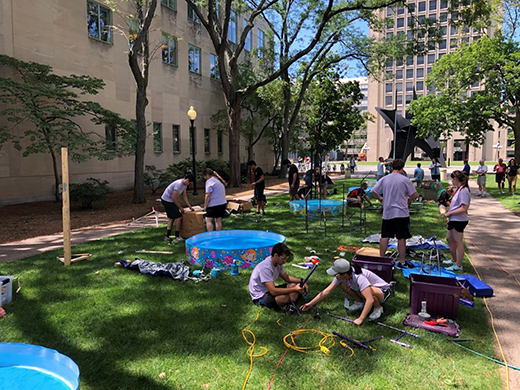