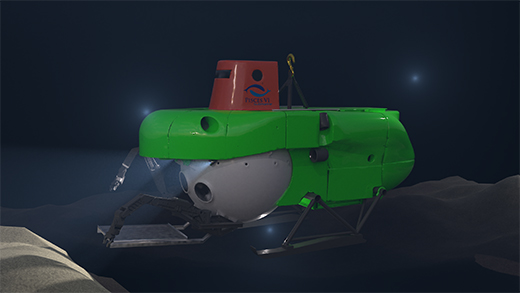 The unveiling of the Pisces VI submarine, shown in this rendering, will be at 1 p.m. Saturday, June 1, in Salina. The submarine, built with the help of Kansas State University Polytechnic Campus students, is one of the deepest-diving, privately owned submarines. | Download this photo.

SALINA — One of the deepest-diving, privately owned submarines in the world will be unveiled Saturday, June 1, in Salina — and it was built with the help of Kansas State University Polytechnic Campus students.

The Pisces VI is a three-person capacity submarine, able to dive to an operational depth of 7,155 feet and support a minimum of 140 hours underwater with a mission length of up to 14 hours.

The public unveiling of the Pisces VI submarine will be at 1 p.m. Saturday, June 1, in Hangar 509 at the Salina Regional Airport.

Pisces VI, which is owned by Scott Waters, Salina, partnered with Kansas State Polytechnic to involve students in the building process, furthering the campus's hands-on education style. Students assisted in various aspects of the project, from technical, manual procedural documentation to a slurp gun device fitted specially for the Pisces VI submarine.

"Working with Kansas State Polytechnic has been amazing," Waters said. "The ability to have students working on this project with us has been very helpful, and the students have been able to gain real-world knowledge and apply the skills they're learning.

"I'm most excited knowing that the students will be able to put this project on their resumes and allow them to stand out with employers," Waters said. "Kansas State Polytechnic shows how important their students' futures are to them by being so proactive. I look forward to this long-term partnership and the impact we're able to have on students."

The slurp gun is a device, created by a Kansas State Polytechnic sophomore, allows the submarine to take specimen samples while deep below the surface and transport those samples safely and securely back to study. The device essentially operates like an underwater vacuum, operated from inside the submarine, and stores samples in a holding tank until the submarine again reaches the surface.

The submarine will be available for hire for scientists, filmmakers and high adventure tourists. It is designed to fit into a shipping container, providing for inexpensive travel around the world. Its first expedition after sea training is in December.

"This has been a fantastic opportunity for our students to be involved with something really significant," said Kurt Barnhart, associate dean of research at Kansas State Polytechnic. "It's hard to overstate the potential impact of this project has had as Pisces VI partners with explorers around the globe to push the boundaries of deep-sea exploration."

The Pisces VI company mission is to explore, educate and inform about the deep ocean — what Waters refers to as the "last remaining unexplored frontier on the planet." Walter believes the oceans are a valuable shared resource and expanding knowledge is essential. He says his company wants to discover new life, educate the youth of the world on the importance of STEM education, and aid in preserving oceans.

Waters said he has always had an interest in exploration and entrepreneurship. He built his first hobby submarine in 2007, a 350-foot-diving, two-person submarine. That sparked interest in a deep-diving submarine, and after years of searching, he found the Pisces VI.

Media are welcome to attend Saturday's event for photos and interviews. Comments begin at 1:15 p.m. and interviews will be available directly following.