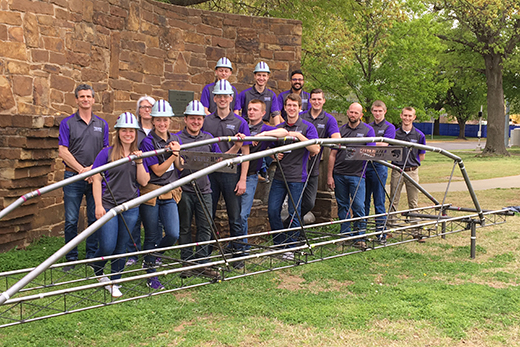 MANHATTAN — The Kansas State University Steel Bridge Team took second place in the Mid-Continent Student Conference April 12 at the University of Oklahoma, qualifying for the national-level competition May 31-June 1 in Carbondale, Illinois.

In earning its second-place overall ranking, the team from Kansas State University scored first in aesthetics, first in stiffness, third in construction speed, first in efficiency, second in economy and second in lightness.

"This year we saw real improvement in our performance," said Angie Mitchell, senior in civil engineering and team co-president, from Bonaparte, Iowa. "At the regional competition in 2018, the team earned second place in aesthetics, second in stiffness and third in efficiency, for a fifth-place overall finish."

Scoring is designed to simulate real construction based on considerations important in that arena with dollar values assigned rather than points. For example, safety is a huge concern on a construction site, and during the assembly portion of the competition, rules cover dropping tools, or nuts and bolts, as well as stepping onto a "river" designated with tape on the floor. The timed portion of the competition emphasizes the importance of meeting deadlines, just as with actual construction projects, and stiff penalties are incurred for going over schedule.

Quality of fabrication, including welding, are not considered as the bridge entries are allowed to be fabricated professionally or by students.

"At K-State, we are proud that we do all of the steel fabrication ourselves in the civil engineering metal shop," said Grant Lyons, senior and team co-president, civil engineering, Manhattan.

Scott Schiff, teaching professor in the civil engineering department at the Carl R. Ice College of Engineering, is faculty adviser to the team.

From out of state: Kurtis Wicka, freshman in civil engineering, Paso Robles, California.