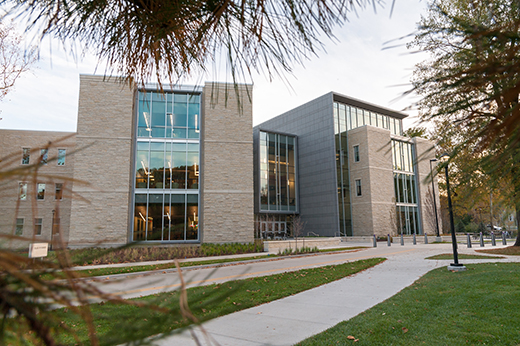 The inaugural Gates Capital Speaker Series will feature a panel discussion, "The Next Decade: Outlook for Kansas and the U.S," at 9 a.m. Thursday, March 28, in the Business Building's Lecture Hall.

MANHATTAN — A new speaker series in the Kansas State University College of Business Administration will welcome a trio of distinguished business leaders to campus for the panel discussion "The Next Decade: Outlook for Kansas and the U.S."

The panel will begin at 9 a.m. Thursday, March 28, in Lecture Hall in the Business Building. The event is free and open to the public.

Organized by the college's finance department, the inaugural Gates Capital Speaker Series event will bring together three aspects of expansive financial interest: industrial, financial and governmental. The panel discussion will revolve around the financial policy impact of new government tariffs as well as the impact of general government financial policies on the Kansas and national economies.

Making up the panel will be Michael Upchurch, Kansas City Southern executive vice president and chief financial officer; Katrina Scott, Mariner Wealth Advisors chief investment officer; and Alison Felix, vice president of the Kansas City Federal Reserve. Each member of the panel will speak about the impact of the topic on the sector of the economy they represent, followed by a question-and-answer session.

Upchurch is part of the executive leadership for Kansas City Southern, which is headquartered in Kansas City, Missouri. The transportation holding company has railroad investments in the U.S., Mexico and Panama. The company's North American rail holdings and strategic alliances are primary components of the NAFTA railway system, linking the commercial and industrial centers of the U.S., Mexico and Canada.

As chief investment officer, Scott is part of Mariner Wealth Advisors' executive leadership team overseeing all aspects of investments across the firm. Her responsibilities include leading Mariner's investment committee and private investment committee, and is a member of its risk committee. Since she joined the firm in 2007, Scott has held a wide range of responsibilities throughout the organization, including serving on the investment and asset allocation committees and managing fixed income portfolios for high-net-worth clients. Before moving into a leadership role, she co-managed a tactical exchange-traded fund portfolio.

Felix is vice president and Denver Branch executive at the Federal Reserve Bank of Kansas City. In this role, she serves as the bank's regional economist and representative in the states of Colorado, Wyoming and northern New Mexico. Felix also recruits and works closely with the branch's board of directors and is responsible for briefing the Kansas City Fed's president — a member of the Federal Open Market Committee — on economic and business activity in the Denver region's states. Felix's research focuses on public finance and labor issues, with an emphasis on tax policy, state and local government finance and the economics of education.

The panel marks the inaugural event in the Gates Capital Speaker Series, which will bring successful finance professionals to Kansas State University to share their knowledge and experience. Lectures will be given each year and are sponsored by Gates Capital Management.

Media are welcome to attend the panel discussion. Please RSVP by noon Wednesday, March 27, by contacting media@k-state.edu or 785-532-2535.