MANHATTAN — A longtime Cargill executive and Kansas State University alumnus will receive the university's highest honor, an honorary doctorate, in May.

James "Jim" Haymaker will receive the honor at the Graduate School commencement ceremony at 1 p.m. Friday, May 17, in Bramlage Coliseum. He also will serve as the commencement speaker.

The university's request to recognize Haymaker with the degree was approved by the Kansas Board of Regents at its Feb. 20 meeting.

Haymaker earned bachelor's degrees in economics and French from Kansas State University in 1969, studying abroad at Paris-Sorbonne University during his junior year. He received an MBA in finance and international business from the University of Chicago in 1971 and a master's degree in applied economics from Belgium's University of Louvain in 1972.

"It is fitting that Kansas State University recognize James Haymaker with this high honor," said Charles Taber, university provost and executive vice president. "He exemplifies how higher education can truly make a difference, using his K-State degrees to have a successful lifetime career with Cargill both domestically and internationally. He also has been an active supporter of his alma mater, serving on several advisory boards and funding numerous scholarships in academics and research and for first-generation students that are helping K-State students in their quests for their own successful careers."

Haymaker joined Cargill, a provider of food, agriculture, financial and industrial products and services to the world, in 1973 as a financial analyst and retired in 2011 as its corporate vice president of strategy and business development, a position he held for 11 years. Haymaker's Cargill career also included serving as project manager in its consumer marketing department from 1976-1978 and then working overseas as associate manager and then general manager of Cargill's DuFruit Food and BMBH & Co. in Mannheim, West Germany, from 1978-1980 and as executive supervisor/director of swine operations for Cargill's Piensos Hens S.A. in Barcelona, Spain, from 1981-1987. He returned to the U.S. to be the global corporation's vice president/general manager of Sunny Fresh Foods from 1987-1988 and as vice president/manager of Cargill's financial services department from 1988-2000 before being elected to the corporate vice president position.

With his wife, Kathy, Haymaker has established several scholarships at Kansas State University that support students in economics and students conducting cancer research through the university's Johnson Cancer Research Center. The Haymakers also have supported funds for faculty support and a new scholarship fund, the Raghunath Chakrabarti Dare to Dream Scholarship, for first-generation students.

Recognized by the College of Business Administration as its 2005 Outstanding Financial Executive of the Year, Haymaker also received the 2011 Merit Award for Entrepreneurship from the College of Arts and Sciences; was named the 2013 College of Arts and Sciences Alumni Fellow, which is selected by the Dean's Council, President's Office and K-State Alumni Association; and was the economics department's 2015 Distinguished Economics Alumnus.

Since retiring, Haymaker has devoted his time to his family, philanthropy and angel investing, which is early-stage funding of new company startups. 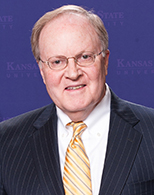 James "Jim" Haymaker will receive an honorary degree from Kansas State University in May. Haymaker, a former longtime executive with Cargill, is a 1969 graduate of the university.