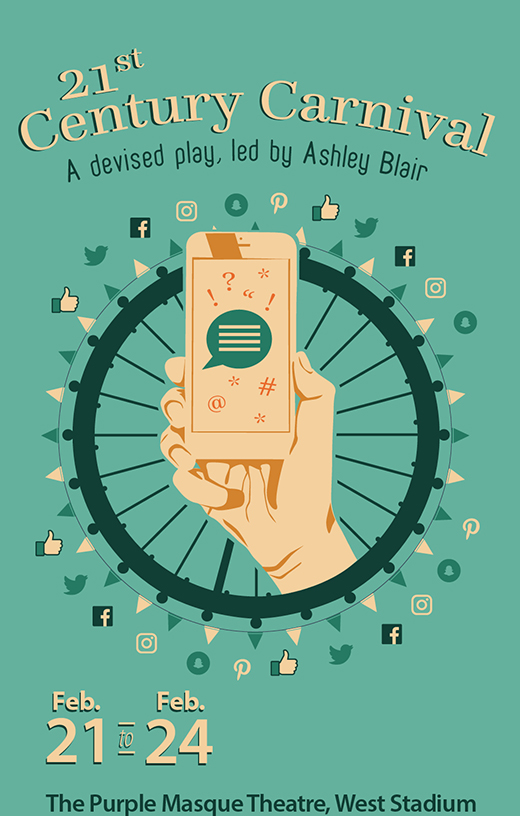 The effects of social media are explored in "21st Century Carnival," which will be presented by K-State Theatre at 7:30 p.m. Feb. 21-23 and 2:30 p.m. on Feb. 24 in the Purple Masque Theatre in West Stadium at Kansas State University.

"21st Century Carnival" explores social media as a carnival attraction and how the allure of a red bubble and the chime of a new notification draws people into a digital world. Social media sites have an allure that has become irresistible, particularly to young millennials who have never known life without a personal computer, said Ashley Blair, director of the play and a master's student in drama therapy from Wye Mills, Maryland.

As part of the program, the audience will have an opportunity to talk about their own social media experiences through a voluntary survey and/or through a talk-back that is planned after each performance.

Tickets are $9 for the general public; $7.75 for seniors, military, faculty and staff; and $5.75 for students and youth. They can be purchased online at k-state.edu/mtd/tickets or by calling 785-236-8638. Tickets may also be purchased one hour before each performance at the Purple Masque Theatre. All tickets, regardless of purchase method, include sales tax and are free from convenience fees.

The following Kansas State University students are part of the cast or crew for "21st Century Carnival":

From out of state: Anissa Davis, senior in theatre, Hastings, Nebraska, set design.