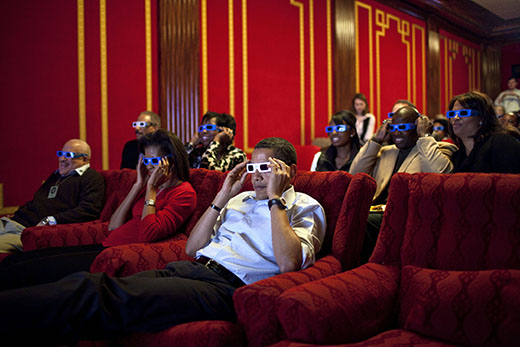 In this Feb. 1, 2009, photo, President and Michelle Obama and their guests don 3D glasses while watching a Super Bowl commercial in the family theatre at the White House. Photo by Pete Souza. | Download this photo.

MANHATTAN — A national traveling exhibition featuring the work of a Kansas State University alumnus who served as the official White House photographer to two presidents will make its first stop at the university's Marianna Kistler Beach Museum of Art and include a talk by the iconic photographer.

"Pete Souza: Two Presidents, One Photographer" will be on display Feb. 5-April 27 in the museum's Helm Gallery. The exhibition showcases 56 Souza photographs of two presidents at the opposite end of the political spectrum: Ronald Reagan and Barack Obama. Souza originally pursued his master's degree in journalism at Kansas State University in the 1970s and completed the degree in 2006.

"This exhibition includes Pete Souza's favorite images of Presidents Reagan and Obama, providing us with candid moments that are windows into their humanity," said Hava Gurevich with art2art Circulating Exhibitions, the exhibition organizer, of Ann Arbor, Michigan. "What we see in Souza's photographs are two presidents who clearly respected the office they held and genuinely respected the people they interacted with, no matter the circumstances."

"Pete Souza indicated to us that he wanted the exhibition to travel around the country in advance of the 2020 presidential election," said Liz Seaton, Beach Museum of Art curator. "He hopes to encourage civic conversation about the role of the presidency."

Currently a freelance photographer in Washington, D.C., Souza is the author of the book "Obama: An Intimate Portrait," which debuted at No. 1 on the New York Times bestseller list. He also is a professor emeritus of visual communication at Ohio University. Earlier in his career, Souza worked for the Chanute Tribune and Hutchinson News in Kansas and the Chicago Tribune.

In conjunction with the exhibition, Souza will give an on-campus talk about his work at 7:30 p.m. Tuesday, March 5, in McCain Auditorium. Tickets are free and required to attend. Tickets can be obtained at the McCain box office beginning Feb. 19, or reserved by calling 785-532-6428 and picked up at will call the night of the performance. Box office hours are noon to 4 p.m. Tuesday through Friday and 90 minutes before the Souza talk.

Souza's Kansas State University visit and talk are being made possible by the Friends of the Beach Museum of Art board and its Souza Fundraising Committee, which received support from community members, local businesses and campus entities. A list of all sponsors for the exhibition and talk is available at beach.k-state.edu. Committee members include co-chairs Anne de Noble and Barbara Gatewood, with Michaeline Chance-Reay, Carole Chelz, Anthony Crawford, Michael Donnelly, Gloria Freeland, Rebecca Hackemann-Bahlmann, Jay Nelson and Susan Noblett. 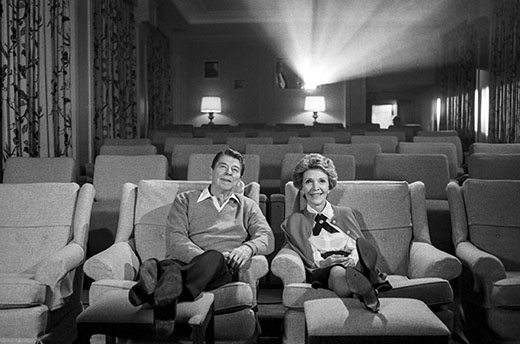 President and Nancy Reagan watch a movie during a taping of a television special with Barbara Walters in the White House in this photo from Feb. 26, 1986. Photo by Pete Souza. | Download this photo. 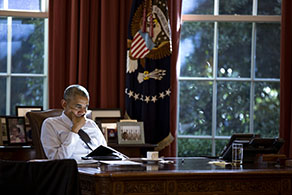 President Obama works at the Resolute desk in the Oval Office in this Oct. 14, 2016, photo. Photo by Pete Souza. 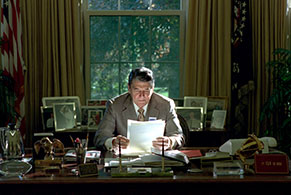 President Reagan works at the Resolute desk in the Oval Office in this Oct. 26, 1988, photo. Photo by Pete Souza.