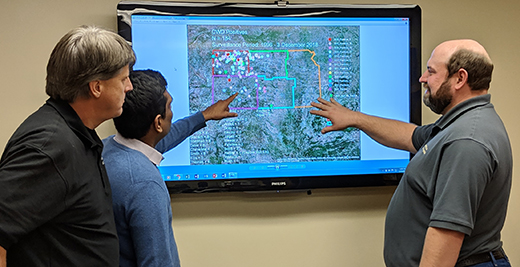 MANHATTAN — The Kansas State Veterinary Diagnostic Laboratory at Kansas State University is reporting a gradual uptick in the number of positive cases of chronic wasting disease in Kansas, with northwestern counties being the worst affected.

The fatal disease is found in deer and elk. According to the diagnostic laboratory, as of Dec. 3, 184 positive cases of the disease have been identified in the state since 2009. The uptick is based on evaluation of the number of cases submitted to the lab over the years.

"Chronic wasting disease is a transmissible spongiform encephalopathy caused by abnormal prions — or proteins — that affect members of the deer family: white-tailed deer, mule deer, elk and moose," said Ram Raghavan, geospatial epidemiologist with the diagnostic laboratory. "Since its first observation in 1967, chronic wasting disease has spread to 25 states in the U.S., including Kansas, and to two Canadian provinces."

In some states, the disease has steadily increased among free-ranging and captive cervid herds, particularly white-tailed deer, Raghavan said. No treatments or vaccines are available.

"It is believed that in some areas where chronic wasting disease is prevalent, white-tailed deer populations will decline to unrecoverable levels in the long term if the disease is not adequately managed," he said.

Such a decline in the state’s white-tailed deer population could have significant economic effects in Kansas as a recent Southwick Report found that deer hunting is an important economic driver in in the state, Raghavan said, particularly in small, rural communities where some jobs and retail businesses rely on hunting. The report also found that deer hunting is a major source of out-of-state revenue for the state, he said.

Raghavan, who is also an assistant professor in the university's College of Veterinary Medicine, said the majority of cases in Kansas have primarily been found in the upper northwestern counties, with a prevalence level of this disease reaching upward of 20 percent among white-tailed deer in some counties. Positive cases also have been confirmed in other central and western Kansas areas.

"The chronic wasting disease prion is transmitted from infected to noninfected deer through exposure to feces, urine and saliva, and also from environmental sources such as soil and potentially plant materials," Raghavan said. "The prions can survive in soil up to two years or more."

Recent studies from other parts of the nation have indicated certain types of soil, such as those with a higher clay content, favor longer chronic wasting disease prion survival. Raghavan has worked closely with Shane Hesting, wildlife disease coordinator at the Kansas Department of Wildlife, Parks and Tourism. Using Kansas deer samples submitted to the Kansas State Veterinary Diagnostic Laboratory for chronic wasting disease testing over the past several years, Raghavan has found similar associations. Positive Kansas deer samples for the disease tended to originate from geographical areas with soils that have higher clay content, possibly lower pH and low runoff.

The information is vital for efforts to effectively manage and prevent the movement and potential further spread of chronic wasting disease within the state, Raghavan said.

Currently, the disease is not thought to cross the species barrier and affect humans, cattle or other domesticated animals. The Centers for Disease Control and Prevention offers recommendations for safety and to decrease potential risk of exposure to chronic wasting disease by hunters at cdc.gov/prions/cwd/prevention.html.

The Kansas State Veterinary Diagnostic Laboratory is offering free chronic wasting disease test kits to all hunters, veterinary practitioners and producers. The test kits include sample collection instructions, containers of formalin, packaging material, a shipping container and test submission forms. While the kits are free, there is a $7 charge for shipping the kit from the diagnostic lab. Kits can be ordered by calling the lab's client care at 866-512-5650 or by email to clientcare@vet.k-state.edu.

The lab also offers the chronic wasting disease test for $28 per animal, with a turnaround time of around three to four days. For submissions containing whole cervid heads, an additional processing charge of $15 per head will be added. For further instructions on how to collect and package samples for CWD testing, go to the Kansas State Veterinary Diagnostic Lab YouTube channel at youtube.com/watch?v=jzmFN6tVa_k.