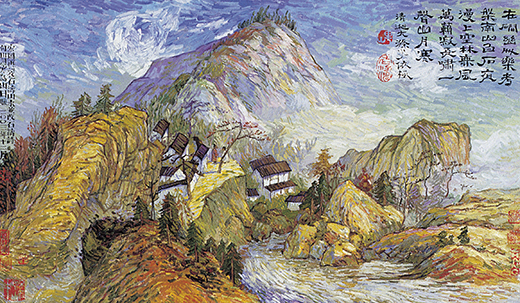 Zhang grew up in China as a member of the Muslim minority, suffering persecution for his religion and his political beliefs under the regime of People's Republic of China founder and Communist Party Chairman Mao Zedong. Zhang's travels around China as a young artist, most especially his study trip to Dunhuang in the western province of Gansu, proved seminal to his development. Dunhuang was an important stop along the network of trade routes known as the Silk Road, which connected Europe and Africa to the Middle East and Asia. Through the Silk Road, Buddhism traveled from India to China, resulting in the establishment of Buddhist cave temples around Dunhuang between the fourth and 14th centuries. The cave temples featured painting styles different from what Zhang had learned in art school and showed signs of the mural artists' awareness of European painting.

Zhang moved to New York City in 1982 to study art and to start a new life.

Works on display at "Culture Mixmaster" show Zhang's lifelong interest in the cycle of travel, immigration, transmission of ideas, and cultural cross-pollination. Included are an oil painting applying the signature style of Vincent van Gogh to a landscape scene from a famous Chinese ink painting, and a pingpong table that requires players to avoid letting the ball fall through cutouts in the shape of the head of Chairman Mao

"Cultural Mixmaster" runs through Dec. 22 in the Beach Museum of Art's Hyle Family and Marion Pelton galleries. Major support for this exhibition is provided by a grant from the Greater Manhattan Community Foundation's Lincoln & Dorothy I. Deihl Community Grant Program, with additional sponsorship by Anderson Bed & Breakfast, and Terry and Tara Cupps.

Several events are planned as part of Zhang's exhibition:

• Registration is open until noon Wednesday, Oct. 3, for the Ping-Pong Mao Tournament, a part of the Beach Museum of Art's Art in Motion festival on Oct. 6. Spots are limited and registration is first come, first served. To register, call the museum at 785-532-7718 or email beachart@k-state.edu with name, phone number, email address and level of experience in table tennis.

• A Gallery Conversation with Zhang Hongtu, also a part of the Art in Motion festival, will be at 2:15 p.m. Oct. 6 at the Beach Museum of Art.

• Zhang will discuss Buddhist cave temples along the Silk Road for a 5 p.m. presentation on Tuesday, Oct. 9, at the Spencer Museum of Art on the campus of the University of Kansas, Lawrence. 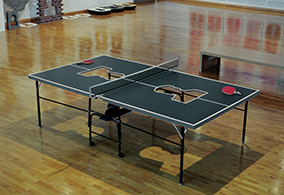 "Ping-Pong Mao" by Zhang Hongtu. The30 inch by 60 inch by 108 inch mixed media installation from 1995 is courtesy of the artist and Baahng Gallery.