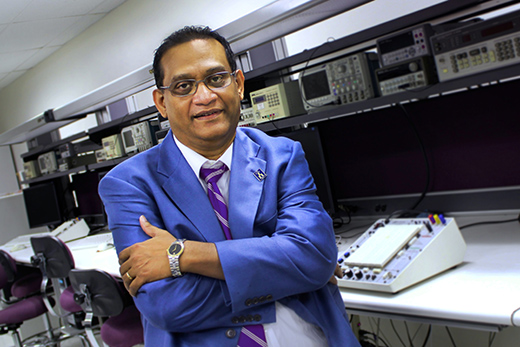 Saeed Khan, professor and coordinator of the electronic and computer engineering technology and unmanned aircraft systems design and integration degree options at Kansas State Polytechnic, has given the campus its first patent with his research on wireless power transfer. | Download this photo.

SALINA — A professor at the Kansas State University Polytechnic Campus has developed a way to improve wireless power transfer, an invention that is giving the campus its first patent.

Saeed Khan, professor and coordinator of the electronic and computer engineering technology and unmanned aircraft systems design and integration degree options at Kansas State Polytechnic, has been granted a patent for a helical antenna wireless power transfer system by the U.S. Patent and Trademark Office. The purpose of the innovation is to provide a safe and more efficient way of transferring power from one place to another without the use of wires. What makes Khan's work so unique is his discovery of including a ground plane with the system, which increases the amount of power you can transfer at greater distances.

In 2012, Khan began studying wireless power transfer with two staff members at Kansas State Polytechnic after receiving a grant from the Air Force Office of Scientific Research. Their original focus was on powering unmanned aircraft wirelessly; however, as the project evolved, Khan says he saw numerous potential applications of the technology.

"Imagine sitting in a meeting and underneath the conference table is a wireless charging system refreshing your computer's battery, or pulling into the mall and charging your electric car without plugging it in — these are just some of the exciting possibilities of the ingenuity of a helical antenna wireless power transfer system," Khan said.

The system contains two helical, or spiral, antennas tuned to resonate at similar frequencies. Electromagnetic energy is wirelessly transmitted from one antenna to the other in a communication space called the near field, which can be small or large depending on the frequency. By Khan adding a ground plane, usually made from metal material like aluminum or copper, to the system, the distance that the power can be transmitted and the efficiency of the transmission are both increased.

"Being awarded a patent for my research is a recognition of the pure enjoyment I get out of the work I do," Khan said, "but I also think it demonstrates the commitment this campus has to innovation. What students are learning today may not be what they are learning next year, so it is important that we stay involved in creative output for the betterment of our students and our society."

Kansas State University as a whole has a portfolio of more than 275 diverse patents. Christopher Brandt, president and CEO of the Kansas State University Research Foundation, says each of these intellectual discoveries plays a significant role in helping the university meet its land-grant mission as well as reach its goal of becoming one of the nation's Top 50 Public Research Universities by 2025.

"The Kansas State University Research Foundation received 93 invention disclosures in fiscal year 2018; the previous record was 73. We've now seen four straight record years and these are important metrics that demonstrate growth in the research enterprise at K-State," Brandt said. "Technology transfer from the university to the marketplace is also an important part of our land-grant mission. The commercialization of intellectual property developed by K-State accelerates the delivery of research results to the public and shows how our research is closely tied to the economic success of our state."

Saeed Khan, professor and coordinator of the electronic and computer engineering technology and unmanned aircraft systems design and integration degree options at Kansas State Polytechnic, has been granted a patent for a helical antenna wireless power transfer system.