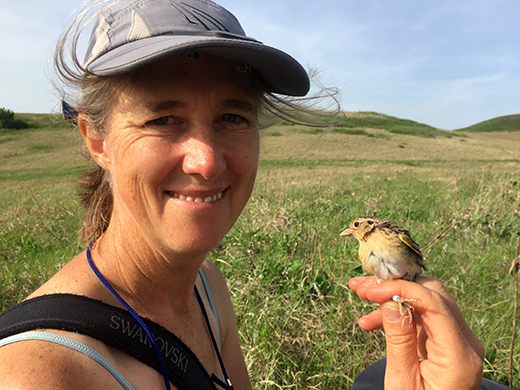 Alice Boyle's study of declining grassland bird populations has received support from the National Science Foundation. Boyle, assistant professor of biology at Kansas State University, is also a musician and plans to communicate her research results to citizens around the state with a performance she is developing. | Download this photo.

But studying dickcissels, eastern meadowlarks and grasshopper sparrows is complicated by the fact that they move — a lot. And why they move and how that movement affects their populations is not well understood.

The grassland environment is complex, so understanding dramatic differences in abundance of animals from year to year requires charting differences in and species responses to rainfall variability, grassland management practices such as burning and grazing, and changes in prey and predator communities. Boyle has a head start on gathering those data thanks to the Konza Prairie Biological Station, an 8,600-acre native tallgrass prairie research area jointly owned by Kansas State University and The Nature Conservancy.

"We have four decades of data that have been collected through the Long-Term Ecological Research program at Konza, plus our studies there of individually marked and tracked birds," Boyle said.

"We can determine the consequences of drought for an individual bird physiologically and their nest success and movement," Boyle said. "This is the holy grail of population biology because you can only do it by pulling all the pieces together. It is incredibly hard to do that in wild bird populations."

Boyle and Hefley's work in developing new statistical methods to integrate and reconcile data and at different spatial and time scales could become a model for other researchers to follow. They aim to cross-train students in both statistical and biological methods and increase appreciation of prairie ecosystems.

"This project builds upon Dr. Boyle's prior research and the long-term datasets collected at Konza Prairie, said John Blair, university distinguished professor of biology and director of the Konza Prairie Biological Station. "Understanding how climate interacts with other environmental factors to affect grassland bird populations will advance conservation efforts at local, regional and global scales. The research approaches developed here by Drs. Boyle and Hefley also can be applied to understand and predict population changes in other species."

In addition to setting a new standard for data integration and application to study of bird populations, Boyle plans to communicate her research to the public using music.

"My first degree was in viola performance, and I'm in a band and play the fiddle," Boyle said. "I want to develop a show that we take to rural Kansas communities talk about the importance of the tallgrass prairie and my experiences as a biologist."

"Professor Boyle's planned musical science outreach and communication activity is a creative way to demonstrate the broader impacts of her research and share it with the public. It is very much in keeping with K-State's goals of conducting cutting-edge research while also excelling in teaching and outreach," she said.

"We can determine the consequences of drought for an individual bird physiologically and their nest success and movement. This is the holy grail of population biology because you can only do it by pulling all the pieces together. It is incredibly hard to do that in wild bird populations."