MANHATTAN — U.S. Sen. Jerry Moran, Kansas, will deliver the first Landon Lecture of the 2018-2019 school year at Kansas State University. Moran's lecture, "Answering the call: Serving a global society post 9/11," will be 10:30 a.m. Tuesday, Sept. 11, in Forum Hall at the K-State Student Union, and is open to students, faculty, staff and the public.

Sept. 11, 2018, marks the 17th anniversary of the day terrorists launched the largest attack on U.S. soil since Pearl Harbor. It's a day not to be forgotten and a day that has changed the world in many ways, from international relations and world trade to security and defense. In this Landon Lecture, Sen. Moran will reflect on how these attacks invigorated his call to service and helped inform his ongoing priorities in Washington, D.C., on behalf of our global society.

"Landon Lectures are an incredible opportunity for the K-State community to hear firsthand from today's national and international leaders," said Linda Cook, chair of the Landon Lecture Series and the university's chief of staff and director of community relations. "That's why we're especially pleased to kick off this year's lecture series with Sen. Moran, who has been representing Kansas in the U.S. Congress since 1996, first as a member of the House and now as a member of the Senate."

Before his election to the Senate, Moran served seven terms in the U.S. House of Representatives. He has been returning to Kansas each weekend since he was first elected to Congress in 1996, and holds town hall meetings in all 105 Kansas counties during every session as part of his "Kansas Listening Tour."

Moran's service has earned several prestigious honors, including the Science Coalition's Champion of Science Award and the National Rural Health Association's Legislative Award in 2014, the National Down Syndrome Society's Impact Award in 2017 and the inaugural Dennis Moore Alzheimer Champion Award from the Alzheimer's Association of Central and Western Kansas in 2018.

A member of the board of governors of the KU School of Law, the board of trustees of the Fort Hays State University Endowment Foundation and a former trustee of the Eisenhower Foundation, Moran is an active member of the Lions Club, Rotary Club and the Sons of The American Legion. He also serves on the U.S. Military Academy's board of visitors and previously served on the U.S. Air Force Academy's board of visitors.

Moran and his wife, Robba, live in Manhattan and have two daughters — Kelsey and Alex — who both hold degrees from Kansas State University.

The Alfred M. Landon Lecture Series is one of the most prestigious lecture series in U.S. colleges and universities. Instituted in 1966 by former Kansas State University President James A. McCain, the series is a tribute to the late Alfred M. Landon, who served as governor of Kansas from 1933-1937. On Dec. 13, 1966, Gov. Landon delivered the series' first lecture, "New Challenges in International Relations." Sept. 9, 2018, would have marked Gov. Landon's 131st birthday. 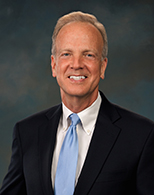