Join Sharon Snyder, first lady of Wildcat football, and the Snyder family; Eric Stonestreet, Emmy Award-winning actor and Kansas State University alumnus; Kevin Lockett, former Wildcat and Kansas City Chiefs football player; and many others who have shown their pride by wearing a Fighting for a Cure shirt in honor of the university's cancer survivors and researchers.

The Fighting for a Cure Day celebration will include a halftime tribute by the Pride of Wildcat Land Marching Band and a tailgate party in Cat Town at Bill Snyder Family Stadium.

Fighting for a Cure shirts raise funds and awareness for the university's Johnson Cancer Research Center. Since 2014, shirt sales have raised $35,000 for cancer research and education at Kansas State University.

This year's shirts are purple with the phrase "Fighting ever fighting for a cure" written in big block letters that contain an image of Willie the Wildcat. The phrase is inspired by the university's fight song, "Wildcat Victory." Near it are Coach Snyder's signature and a Powercat. The shirts are made of soft, lightweight, ring-spun cotton and available in unisex, ladies' and youth sizes.

The shirts are available for $25 at G. Thomas Jewelers, 419 Poyntz Ave.; 1419 Mercantile, 3039 Anderson Ave.; the Johnson Cancer Research Center, 1711 Claflin Road; and online. They also will be available at Purple Power Play in Manhattan City Park between 5 and 8 p.m. Aug. 30 and 31 at Manhattan Broadcasting's booth.

Supporters are asked to join the social media campaign to publicize K-State Fighting for a Cure Day by posting photos of themselves and friends wearing the shirt, along with the hashtag #HelpKStateFightCancer. Photos from 2017 and earlier campaigns are on the center's Facebook page.

The Johnson Cancer Research Center's programs to advance Kansas State University cancer research and education are made possible by private donations. Information is available at cancer.k-state.edu or by calling 785-532-6705. 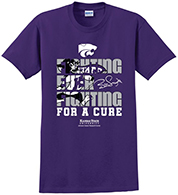