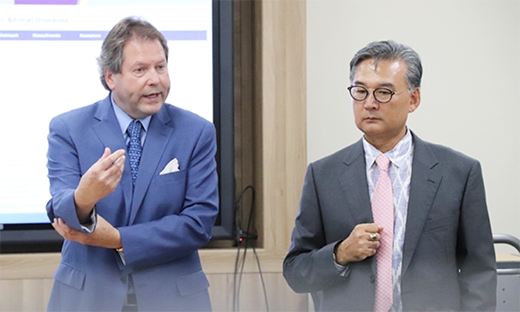 Jürgen Richt, director of the Center of Excellence for Emerging and Zoonotic Animal Diseases at Kansas State University, joins Young Lyoo, dean of veterinary medicine at Konkuk University in Seoul, South Korea, in a discussion with media, government officials, scientists and students about efforts to combat the spread of African swine fever. | Download this photo.

Jürgen Richt, Regents distinguished professor and director of the university's Center of Excellence for Emerging and Zoonotic Animal Diseases, known as CEEZAD, is an internationally recognized expert on transboundary animal diseases. He was in Asia to deliver a series of presentations when an outbreak of African swine fever was reported in China on Aug. 1. A second outbreak was reported on Aug. 16, and a third on Aug. 19.

African swine fever is a highly contagious disease of domestic pigs and wild boar. The disease causes high fever, respiratory problems, weakness, and stillbirths. The economic consequences for the pork production industry are grim: Mortality rates among affected animals approach 100 percent. More than 8,000 pigs were culled in response to the initial outbreak, according to news reports.

"Efforts to handle a potential outbreak have not succeeded, so we have to be concerned about the disease spreading across national boundaries," Richt said. "The first outbreak occurred only a little more than 120 miles north of North Korea."

Richt spoke with veterinary medicine faculty and students at Konkuk University in Seoul, South Korea, and with members of South Korean media and swine associations. He said South Korea is not well prepared to handle the outbreak and that the country is working to improve its emergency procedures. Containing the disease is particularly difficult because it tends to spread via wild boars.

Young Lyoo, dean of the Konkuk University College of Veterinary Medicine, said Richt's information will help provide a front line of defense to save a major industry and protect a valuable protein source.

"Dr. Richt provided not only expert knowledge and opinion on the disease and a control, but also disseminated awareness to the public, government and industry through media exposure," Lyoo said. "His visit showed how important international cooperation is to fight against contagious transboundary disease."

Richt said the disease presents trade problems for China and other Asian countries. China produces nearly half the world's pork.

"African swine fever is a threat to world trade in the pork industry, which will ultimately affect western Europe, the United States and other trade partners," he said.

Stephen Higgs, director of Kansas State University's Biosecurity Research Institute, and Wenjun Ma, associate professor of diagnostic medicine and pathobiology at the university's College of Veterinary Medicine, also traveled to China to give invited talks at the Conference on Animal Infectious Diseases and Human Health jointly conducted by the Chinese Association of Animal Science and Veterinary Medicine and the Chinese Society for Immunology in Harbin, China. Higgs described work at the Biosecurity Research Institute, Richt presented a lecture on Rift Valley fever virus, and Ma discussed his work on bat influenza viruses.

"Our facilities and experts are second to none," Higgs said. "We are keeping a close eye on disease outbreaks around the world and maintaining a rigorous research program to defend against economically devastating livestock diseases."

"Fundamental science questions about diseases like African swine fever can only be addressed in the unique facilities we have by the talented faculty, students and staff at K-State," said Peter Dorhout, the university's vice president for research. "Our land-grant university heritage and mission align perfectly with how Professor Richt and his team apply their new knowledge about African swine fever to help protect the world's food supply and a critical agricultural industry."

Center of Excellence for Emerging and Zoonotic Animal Diseases

Sarah Caldwell Hancock, 785-532-5045, sarhan@k-state.edu, with contributions from Bill Felber of the Center of Excellence for Emerging and Zoonotic Animal Diseases

"African swine fever is a threat to world trade in the pork industry, which will ultimately affect western Europe, the United States and other trade partners."