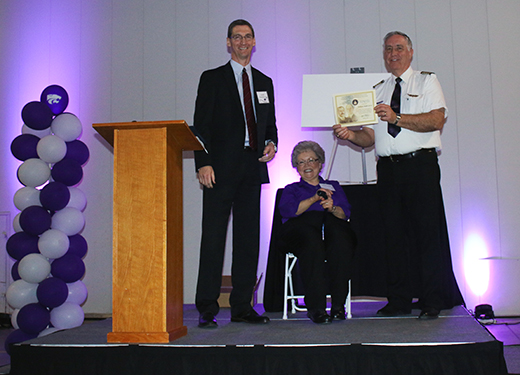 SALINA — Bill Gross, aviation professor and chief flight instructor at the Kansas State University Polytechnic Campus, has spent more than half of a century in the cockpit of an airplane and now his dedication to flying is being recognized by the Federal Aviation Administration.

Gross is the recipient of the Wright Brothers Master Pilot Award, the most prestigious honor issued by the FAA to certified pilots. The award celebrates aviators who have practiced and promoted safe flight operations for 50 or more years through professionalism, service, skill and expertise. Less than one-half of 1 percent of all pilots have earned this recognition.

"I've always been interested in flying, ever since I was a kid and my friend's father took me up for my first ride," Gross said. "When I started learning, I just wanted to get my private pilot certificate; I never dreamed it would be something I would be doing for 50 years. But it's an adventure every day, especially with my students, and I've got the best view out of my office window."

Gross was presented with the award May 4 at an event at Kansas State Polytechnic commemorating his 50 years in the air. His first solo flight was in February 1968. Jerald Eichelberger, manager of the Wichita Flight Standards District Office, and James Lamb, a safety liaison in the FAA Safety Team, were on hand to officially announce Gross' extraordinary achievement.

"It is truly an honor to be able to present the Wright Brothers Master Pilot Award to Bill, who I first met in 1988 when I took my instrument rating practical test from him," said Eichelberger. "Since joining the FAA in 2003, I have learned to know Bill in a much more significant way and have come to appreciate how much he has contributed to the aviation community."

A native of Friend, an unincorporated community in western Kansas, Gross grew up riding a tractor from daylight to dark when he wasn't in school. Although his classmate's father who took him flying planted a seed of curiosity in Gross about aviation, ultimately it was his family's farming roots that influenced his collegiate path.

Gross attended Kansas State University and earned a bachelor's degree in animal sciences and a master's degree in ag education. After graduating and serving in the military, he started teaching high school vocational ag and was a leader for its chapter of the National FFA Organization. He also spent 13 years as an animal feed and health products salesman for the former largest agricultural cooperative in North America, Farmland Industries.

With an eye always on the sky, Gross never abandoned his interest in aviation. One day while at Kansas State University, he took a drive in the country and unintentionally ended up at the local airport. After speaking with some of the employees about how to get started flying, Gross approached his wife, Elaine, about pursuing aviation in his spare time. With her blessing, Gross began flying in the morning and evening and on weekends. Once he received his certified flight instructor certificate in 1970, he began teaching others and has never stopped.

In 1987, Gross finally made flying a full-time career: He was hired by Kansas State Polytechnic — known as the Kansas Technical Institute at the time — to be an instructor in the professional pilot associate degree program. Over the years, Gross helped expand the program to a four-year degree; was the university's chief pilot, transporting the president, coach Bill Snyder and others to their destinations; and created two scholarships in his family's name to assist flight students.

Though it's difficult to estimate how many pilots he has instructed and tested since he began his aviation journey, Gross is adamant about instilling in all of his students a focus on professionalism, dependability, time management, safe operations and taking pride in your work.

"Bill's dedication to aviation and his students is something to be admired," said Monica Riggs, an instructor pilot on the KC-135 at McConnell Air Force Base and a 2005 graduate of the professional pilot program at Kansas State Polytechnic. "His technical knowledge and the professionalism he teaches have led me and numerous others to find success throughout our careers. He expects and demands it in such a way that drives students to expect and demand it of themselves."

"What I love the most about being an aviation professor is watching students progress during their time on campus; they are completely different pilots and people when they graduate from when they entered their freshman year," said Gross. "I enjoy knowing that I've had a small part in their transformation."

Along with the Wright Brothers Master Pilot Award, Gross has earned his eighth master certificated flight instructor accreditation, making him one of only 16 worldwide to hold this designation. He also was selected for Kansas State Polytechnic's distinguished Marchbanks Memorial Award for Teaching Excellence in 2017.

To learn more about the professional pilot bachelor's degree option at Kansas State Polytechnic, contact admissions at 785-826-2640 or polytechnic@k-state.edu or visit k-statepilot.com.