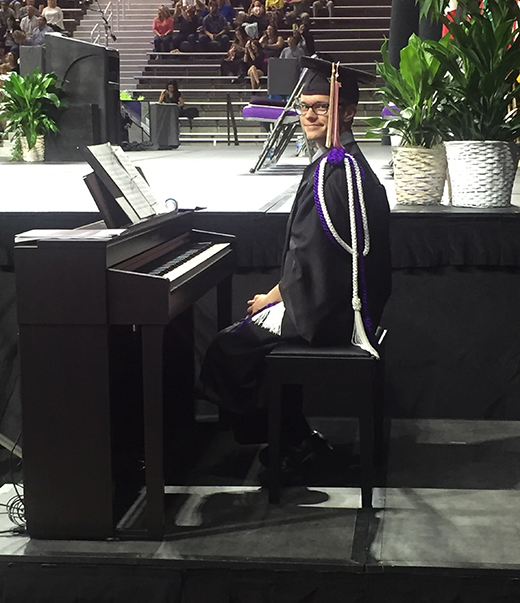 Stephen Kucera has been a fixture at Kansas State University commencement ceremonies for the last six years as an organist. Kucera will play at his last four ceremonies as a student on Saturday, May 12. | Download this photo.

MANHATTAN — For the last six years, Stephen Kucera has had a lot to do with how commencement ceremonies at Kansas State University begin and end.

Kucera, master's candidate in accounting, Kansas City, has played the processional and recessional at 36 university commencement ceremonies since coming to the university as a freshman in fall 2012. He'll wrap up his career as a student organist on Saturday, May 12, by playing at four ceremonies — bringing his grand total to 40 ceremonies as the organist.

Depending on the college, Kucera also provides accompaniment for the national anthem and alma mater at the ceremonies.

"When I first started playing for commencement ceremonies at K-State, the organizing staff had challenges identifying people to play for the commencements," said Kucera, who has been playing the organ since he was 13. "I filled that need and sort of became a regular for graduation season."

Trooper may be more like it. Since his first experience as a commencement organist in fall 2012, Kucera has often played at five ceremonies over two days, and many times has played at four ceremonies in a row.

It will be no different this commencement season. Kucera earns his Master of Accountancy on Friday, May 11, at the Graduate School ceremony. The following day, he'll be back in his familiar role as organist for the colleges of Education, Business Administration, Agriculture and Human Ecology. These back-to-back-to-back-to-back ceremonies start at 11 a.m. and should wind up around 6 p.m. But Kucera will be sticking around for the last ceremony of the day — the College of Engineering — as his sister, Anna Kucera, will be receiving a bachelor's degree in biological and agricultural engineering.

"One of the challenges I face when playing four ceremonies in a row is keeping the list of performers and music organized for each ceremony, such as the national anthem, where singers frequently use different keys," Kucera said. "Each of the colleges also has a slightly different way to conclude the processional 'Pomp and Circumstance,' so it requires me to be adaptive in the moment."

Along with playing at commencement ceremonies, Kucera has been the organist for the First Presbyterian Church in Manhattan for the last five years. As he begins the next chapter in his life, he plans to be a substitute organist at churches needing music for their services. In July, he'll start working in an accounting/finance position with Phillips 66 in Bartlesville, Oklahoma, and he'll be studying to take the certified public accountant exam.

"I also plan on volunteering for different organizations in the Bartlesville area that focus on economic opportunity, youth and diversity/inclusion issues," Kucera said.

His volunteer service follows his path at Kansas State University where he was active in the Student Governing Association. He started as an intern his freshman year and went on to serve four terms as a student senator.

"My final year as a student senator, I was also elected to be the speaker pro tempore of the legislative branch and chaired the Diversity Programming Committee," Kucera said. "This year the student body president and student body vice president asked me to be the student support director for their cabinet, working on many issues such as needs-based scholarships, food insecurity and the launch of the Cats' Cupboard food pantry, and leading the legislative effort to support our K-State DACA students."

The organ isn't the only keyboard instrument that has had a major role in Kucera's time at the university. He has played the piano for diners at Derby Dining Center every Friday from 5:35-6:45 p.m. for six years.

"It started on a whim my first year, but became an important bridge for me emotionally as I tried to adjust to college life," Kucera said. "Music is a way to be honest about how you are feeling and tell stories that are too complex for words to describe. Even since I have moved on from my four-year stay in Moore Hall, I continued to play the piano at Derby every Friday night."

And that's just where you'll find him May 11 after he graduates. He'll be back at Derby for his last Friday night performance.